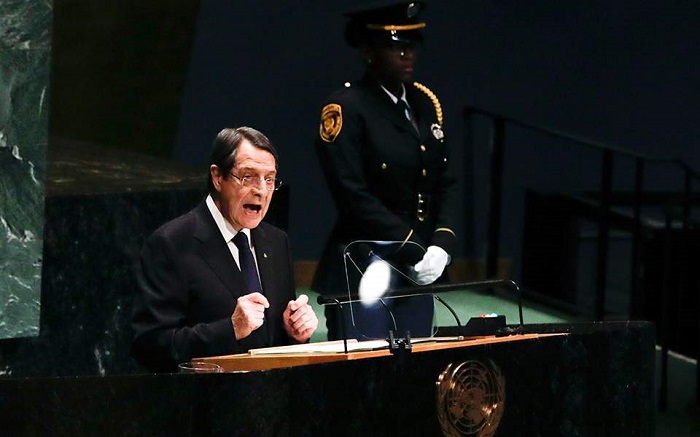 Cyprus President Nicos Anastasiades has deplored Turkey’s “gunboat diplomacy,” saying that Ankara’s illicit activity in the Eastern Mediterranean undermines the prospects of reaching a settlement on the ethnically-split island.
Speaking at the UN General Assembly in New York, Anastasiades declared that Turkey’s actions within the borders of Cyprus’ exclusive economic zone (EEZ) are not only in violation of international law, but also “severely undermine the aim of having a conductive environment for meaningful negotiations.”
“While I do not intend to embark on a blame game, yet, I am not allowed – and the dignity of our people dictates not to do so – to accept the gunboat diplomacy, blackmail tactics, and the attempts to force our side to negotiate under duress,” The Cypriot premier said.
For the last 45 years, he said, “we are undertaking the same positive initiatives in order to end the unacceptable status quo and achieve lasting peace and stability in my homeland.
“But despite his sincere efforts and the constructive engagement of both himself and his predecessors towards a settlement, Cyprus remains the last European divided country,” Anastasiades added.
Anastasiades also stressed that the UN and the Secretary-General’s Good Offices Mission “is the only way forward for us.”
In the same speech, Anastasiades questioned whether UN efforts to resume talks have any chance of succeeding, given Turkey’s aggression as manifested in its violations of Cyprus’ EEZ and the threats of war should Nicosia proceed with its energy program, as well as the intimidation of foreign states and companies involved in offshore drilling.