By signing the “Principles for Responsible Banking” on Monday in New York, Greece’s Piraeus Bank joined a coalition of 130 banks worldwide in committing to taking on a crucial role in helping to achieve a sustainable future.

Speaking with the Greek Reporter, Christos Megalou, the CEO of Piraeus Bank explained that this banking coalition represents over $47 trillion in assets and about one-third of the global banking industry.

The signing ceremony took place at the start of the UN General Assembly, attended by UN Secretary-General Antonio Guterres and the one-hundred and thirty founding signatories of the agreement and over forty-five of their CEOs. 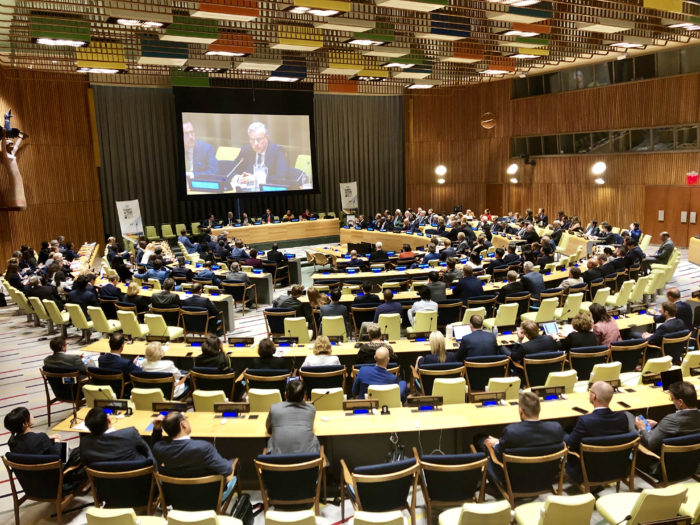 By committing to the Principles for Responsible Banking, these institutions are committing to strategically align their business with the Sustainable Development Goals and the Paris Agreement on Climate Change.

Megalou attended the ceremony, and together with the other CEOs representing banks from around the world signed the Principles for Responsible Banking document.

Megalou represented Europe and sat on a panel with four other CEOs from four continents. They all discussed how banks can become agents of significant change and contribute to addressing global environmental and social challenges.

Mr. Christos Megalou, the CEO of Piraeus Bank attended the ceremony of the UN General Assembly along with 45 CEOs for the signing of the Principles for Responsible Banking.
▶️ https://t.co/VzB86JlqSb#PiraeusBank #UNEP_FI #ResponsibleBanking @UNEP_FI pic.twitter.com/UBgm6ASKTt

Megalou told Greek Reporter that Piraeus Bank has been in the forefront of working with the United Nations Environmental Project Finance Initiative (UNEP FI), noting that ”in a country as beautiful as Greece, it is very important to be able to maintain the quality of the environment”.

Piraeus Bank worked along with another 29 banking members, in drafting the six Principles for Responsible Banking.

”Just like Piraeus Bank played an active role in creating the Principles and their implementation framework, so too will it continue to lead in implementing the Principles by setting targets that increase its positive impact on the environment and society; by creating synergies with clients, investors, suppliers and other stakeholders; with the engagement of its employees; with transparency and a robust governance; and through public reporting on the progress it makes,” Megalou noted.

Watch our interview with Piraeus bank CEO at UN Headquarters:

Speaking about the prospects of the Greek economy, Megalou told Greek Reporter that he is very optimistic about its prospects for growth and investment.

”It is a golden opportunity for Greece, as we have moved on with the reform agenda, to proceed with further structural reforms that will solidify a growth rate much higher than Europe’s and much higher than in many parts of the world,” he explained.

Its declared aim is to fuel growth and promote innovation, in a sustainable and environmentally responsible manner.

The History of Gaziantep, the Earthquake-Destroyed Castle