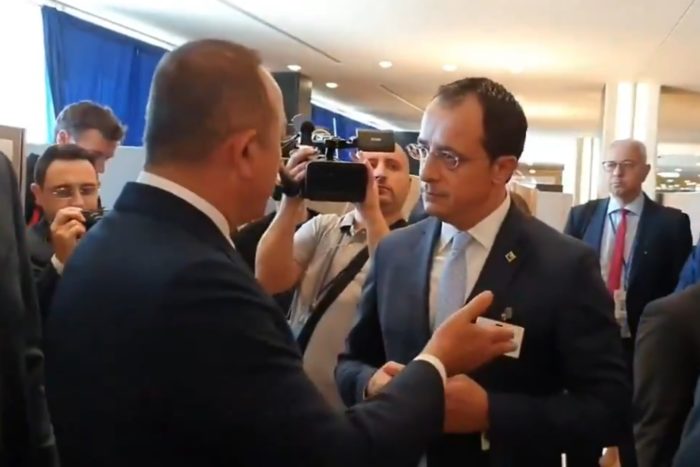 A startling public exchange between Nikos Christodoulides and Mevlut Cavusoglu, the respective Foreign Ministers of the Republic of Cyprus and Turkey, took place in front of the press in New York on Monday.
The two officials spoke together for more than two minutes in front of rolling cameras and had a friendly but tense exchange of views about when and how talks will resume in an effort to solve the longstanding Cyprus problem.
Speaking in English, Christodoulides asked Cavusoglou whether he was ready to agree on the terms of reference to restart the talks immediately.
The Turkish minister said that they first need to agree on exactly what they are going to discuss.
Christodoulides then responded by saying, ”We know what we are going to discuss, there is only one solution: A bizonal, bicommunal federation.”

”Let’s shake hands and agree that we are going to work for this, are you ready? Let’s shake hands on this!” the Cypriot Minister said to Cavusoglu with great warmth.
However, his Turkish counterpart refused to shake hands, saying that ”We have been supporting all the efforts in the past, including the Annan Plan, Crans Montana, but we failed, unfortunately.”
”I want to make sure what we are going to negotiate,” Cavusoglu added.
After that tense exchange, the bodyguards of the Turkish minister blocked the press from recording the discussion any further.
Earlier that day, Christodoulides had met with his Greek counterpart Nikos Dendias so that they could brief each other on developments on the Cyprus problem and coordinate their efforts ahead of crucial meetings they will both hold later this week.

What Has Russia Ever Done For Greece?

Fury Grows in Iran over Woman’s Death after Hijab Arrest