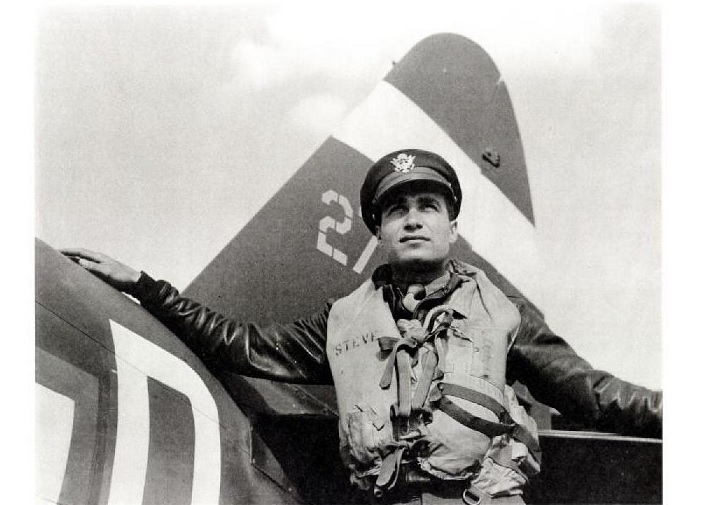 A short film featuring the extraordinary life of WWII ace fighter pilot Steve Pisanos will premiere at the National Hellenic Museum at a showing on Thursday, October 3rd at 6 PM.

Steve Pisanos went into the merchant marine trade to work his way from his native Greece to the United States, where he promptly jumped ship. He then made his way to New York City in an effort to achieve his nearly-utopian dream of becoming a pilot.

With no money or prospects — or even command of the English language — what happened next exemplifies the prototypical “Coming to America” story.

The biographic film, titled “The Mettle Behind the Merit” comprises one episode of the internationally-acclaimed video series, “Old Guys and Their Airplanes.”

Producer John Mollison explains the story’s appeal by saying, “Right now, there’s great controversy about the immigration issue within the United States. Steve Pisanos’ story is one that brings the best of everyone’s vision to a common ground — Steve’s life illustrates what it takes to live the American dream.”

Pisanos went on to become a fighter ace, a member of the Royal Air Force Eagle Squadron, a fighter in the French Resistance, and the first American to be granted citizenship on foreign soil.

The film is sponsored by Calamos Investments and The Distinguished Flying Cross Society. Pisanos was awarded four of these citations for heroism or extraordinary achievement in aerial combat during WWII, and he even earned a fifth DFC for his heroism in the Vietnam War.

John P. Calamos, Sr., the founder of Calamos Investments and a United States Air Force veteran himself, was proud to sponsor the film.

Calamos explains “The story of Steve Pisanos is an outstanding example of the Greek-American story. Hard work, wanting more for yourself and your family, and unwavering commitment to our country is what the National Hellenic Museum celebrates.

“Our third-floor exhibit, ‘The Greek Story in America,’ has fascinating examples illustrating the important contributions of Greek-Americans to the military. We are proud to document and display the history of Greek-American veterans,” he relates.

“Premiering the movie at the Museum, where Pisanos himself donated items from his personal collection, is a wonderful opportunity, and I am proud to be a part of bringing Mr. Pisanos’ story to life for more people to know,” the philanthropist says.

“Our mission is to bring these great stories to greater audiences,” says Bruce Huffman, Chairman of the Board for the Distinguished Flying Cross Society. “You can’t watch this film and not be inspired to reach higher, no matter your circumstances.”

“The Mettle Behind the Merit” premiere event begins at 6 PM at the National Hellenic Museum, which is located at 333 South Halsted Street, Chicago, Illinois, 60661. The premiere is open to the public.

John Calamos, Sr., Steve Pisanos’ son, Jefferey Pisanos, film producer John Mollison, editor Dalton Coffey and members of the Distinguished Flying Cross Society will all be present at the premiere of the film.

For more information on this upcoming event, please click here.

How the Greeks of India Taught Astronomy to the World