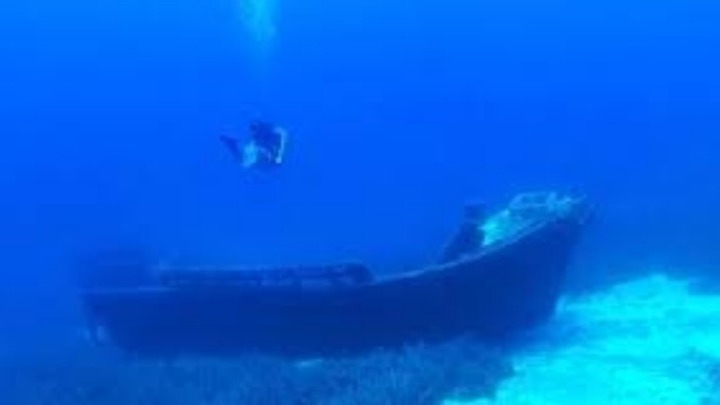 One of the oldest shipwrecks in the world, the Classical-era shipwreck at Peristera, off Alonnisos island, will start to operate as a museum in the summer of 2020.
The pledge was made on Thursday by Regional Governor of Thessaly, Kostas Agorastos, and the Ephorate of Underwater Antiquities Director, Pari Kalamara.
The two officials spoke at the inauguration of the Citizens Information Center on Ancient Submerged Shipwrecks established by the region of Thessaly, at a former primary school building on the island of Alonnisos.
This is an innovative, modern and unique for Greece exhibition center that combines virtual reality displays and digital technologies with traditional museum practices and brings the magic of the deep to visitors by offering them a unique diving experience.
“When some people only talk about innovation in Greece, Thessaly puts it into practice. It brings added value and national wealth. This is not innovation for show but real, useful projects. The programme BLUEMED in which Thessaly was a leading partner is the only European programme that has added value for Greece,” said the regional governor of Thessaly.
“We put the work of many archaeologists back on track and we received two European awards and are proud of the so-called ‘Parthenon of the Shipwrecks’, the operation of which will change the image of Alonnisos and of our islands,” Agorastos added.
The regional governor thanked Minister of Culture and Sports Lina Mendoni for her support, noting that “Thessaly is entering the world map for tourism, of alternative and qualitative tourism.
Four underwater museums will be created in the region of Magnesia that will promote the submerged archaeological sites in several areas.  The museums currently under construction are:
The underwater archaeological museum at Peristera on Alonnisos (Classical-era shipwreck)
The underwater archaeological site at Cape Tilegrafos (Late Roman-era shipwreck)
The underwater archaeological site at Kikynthos, Amaliapolis (Byzantine-era shipwreck)
The underwater archaeological site at Cape Glaros Nion/Sourpis (Byzantine-era shipwreck and other antiquities).
(Source: Athens – Macedonian News Agency)