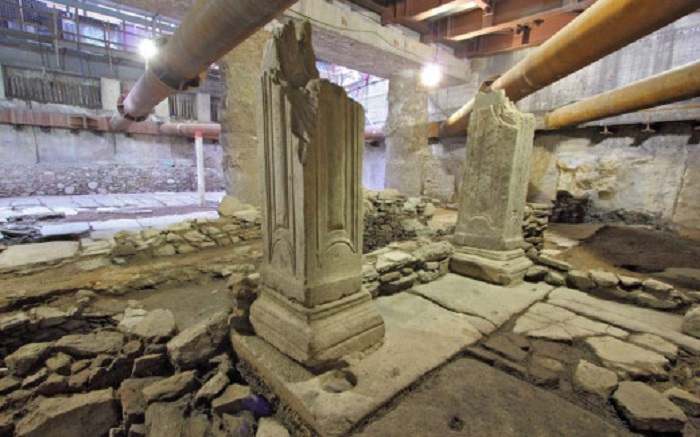 The recent announcement by Greek PM Kyriakos Mitsotakis regarding the removal of antiquities found during the construction of Thessaloniki’s Venizelos Metro Station has sparked fierce reactions from Greece’s main opposition party as well as archaeologists.
Mitsotakis made the announcement during his speech at the Thessaloniki International Fair, where he also said that the Thessaloniki Metro will be in operation by 2023, not by 2020, as Greece’s previous Syriza government had promised.
The prime minister’s statements on the archaeological discoveries also generated a confrontation between the Syriza and New Democracy parties in Parliament on Tuesday.
The previous administration’s Ministry of Culture and Sports had agreed with Thessaloniki’s municipal authority, and all other parties involved, to display the antiquities found during the metro tunnel excavations in situ, at the stations where they were discovered.
However, the New Democracy government has decided that the antiquities which were unearthed will be exhibited at a new museum, which is yet to be constructed, because displaying them inside the stations would further delay the completion of the Metro project.
Kostas Karamanlis, Greece’s Minister of Infrastructure and Transport, stated that there are simply too many antiquities to be displayed at that particular station, and if they were to be exhibited there, the opening of the Thessaloniki Metro would be significantly delayed.
During the meeting Karamanlis held on Tuesday with chairman Nikos Tahiaos and CEO Nikos Kouretas of the new Attico Metro system, the minister admitted that displaying the antiquities where they were found was an idea that had been agreed upon five years ago.
However, the necessary studies for the project have not been finalized to this day.
Fierce reactions from the main opposition
Members of the Syriza government’s Department of Culture are accusing the government of discrediting the work of archaeologists and the importance of the findings. They charge that the current government would rather promote a “dubious archaeological Disneyland” instead of displaying them as found, in situ, at the stations.
The main opposition statement terms the decision to remove the archaeological finds from the Venizelos Metro Station as “catastrophic,” claiming that it shows a total disregard not only for the city’s cultural heritage but also the desire of Thessaloniki citizens to have the finds displayed where they were found.
The statement also says that the new move is “suspicious” and indicates that the Prime Minister and the ruling party are serving private interests instead of the public interest.
The opposition’s statement is signed by former Culture Ministers and Deputy Ministers Nikos Xydakis, Aristidis Baltas, Lydia Koniordou, Myrsini Zorba, Costas Stratis as well as General Secretary of Culture Maria Vlazaki.
Syriza MP and former candidate for the Thessaloniki mayorship Katerina Notopoulou called the proposed removal of the antiquities and their subsequent placement in a yet-to-be-constructed museum a “humiliating act for the city.”
In a press release issued by Notopoulou’s office, Prime Minister Mitsotakis is described “as a young Elgin, who has announced, without any prior consultation with all pertinent authorities involved and the citizens, the plunder and removal of the archaeological finds in order to house them in the planned Museum of Archeological Findings of the Metro.”
The press release further charges that the decision to remove the antiquities from the place where they were found “is a crime against the city.”
The Association of Greek Archaeologists also opposes the removal of the Thessaloniki finds.
The Association issued a statement saying, “The rich dialogue between scientists that took place over the past years has shown that the coexistence (of the metro station and the antiquities) is not only technically feasible but also imperative, in that it presents a unique monumental ensemble highlighting the Byzantine past of Thessaloniki.”
The statement went on to note that this implicit understanding “has been embraced by the people of Thessaloniki, the municipal authorities and the international community.”