GRNews
GreekReporter.comGreeceAugust 25, 1972: The Last Execution in Greece Before Abolition of Death...

August 25, 1972: The Last Execution in Greece Before Abolition of Death Penalty 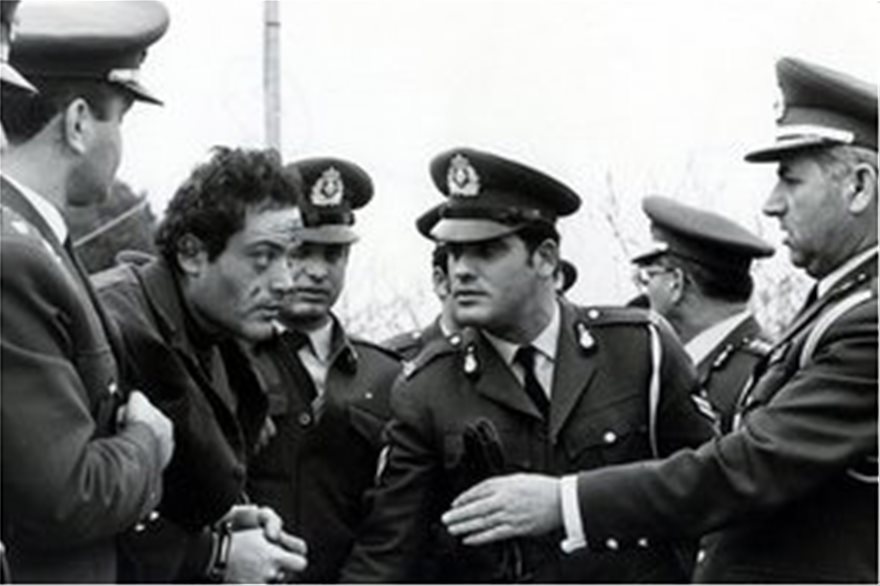 On this day in 1972, 27-year-old Cretan electrician Vassilis Lymberis was executed by a firing squad for murdering his mother-in-law, his wife, and his two children. Lymberis and his accomplices burned down his family home, while 4 members of his family were inside in January 1972.
It was August 25, 1972, with Greece still under military rule, when the last execution in the country took place before the abolition of the death penalty.
Lymberis, who had three accomplices in his crime, claimed he didn’t know that his children were in the house at the time he set fire to it. He said he only wanted to hurt his mother-in-law because she was driving him insane with her behavior.
Lymberis’ heinous crime
Vassilis Lymberis and Vassiliki Markou were married in December 1967 and set up their home together in Metamorphosi, a northern suburb of Athens. He was 22 years of age and she was 19.
After a time, the couple began to have arguments and were known to not be getting along. Lymberis claimed he asked his wife for a divorce before they had children, but that she had refused because she loved him too much.
The couple had their first child, Panagiota, in June of 1969, but that was not enough to bring the two closer. The fighting, which took place mostly between Lymberis and his mother in law, escalated when Vassiliki was pregnant with their second child.
Two years after Panagiota, little Giorgos was born into the world, but the relationship between the couple was at its lowest ebb at that time.
Lymberis left his home and rented an apartment in the center of Athens. Relatives and friends of the family accused him of living a life of depravity, drinking and womanizing and squandering away the family’s money.
During Christmas of 1971, Lymberis met three young men, 20-year-old Athanasios Stamatis, 25-year-old Theodoros Kapretsos and 17-year-old Pavlos Angelopoulos, who lived in the same apartment building as himself.
One night, when Lymberis was drunk, he told his new friends of his plan to kill his mother-in-law and asked for their help, promising that they would not get caught for the crime.
He promised money and a new car to Angelopoulos, the youngster in the group. One night Lymberis and Angelopoulos bought gasoline and went to the house in Metamorphosi but they discovered that the children were in the house and that there was not enough gasoline to set fire to the entire building, so they left.
But on the night of January 5, 1972, Lymberis, Angelopoulos and Kapretsos bought three large containers of gasoline and went to the family home. Kapretsos would act as the lookout while Lymberis and Angelopoulos went into the house to set fire to it.
Angelopoulos and Lymberis had one can of gasoline each, leaving the third at the door. The 18-year-old went into the room where Lymberis’ mother-in-law and the infant boy were sleeping. Lymberis then entered the bedroom where his wife and daughter were sleeping.
Angelopoulos poured the gasoline into the room first, and Lymberis followed suit in his wife Vassiliki’s bedroom. They lit matches and set the place ablaze, amidst the screams of the two women and the children.
Vassiliki jumped out of bed and attempted to call the police and the fire service. Lymberis then grabbed her by the hair and threw her into the flames, then stomped on her chest so she wouldn’t get up while he screamed “Now you’re gonna pay!”
Upon hearing the screams of the women and children, Angelopoulos suddenly experienced pangs of conscience, and he then took the third gasoline container and tried to pour the contents on Lymberis, who hid behind a door and avoided getting burned.
Then he locked the burning house and fled. Angelopoulos later claimed he helped commit the crime because Lymberis had lied to them about the children not being at home.
Lymberis, A, gelopoulos and Kapretsos then returned to Vathi Square where they lived. Lymberis, who had several burns on his face and body, threatened the others to keep their mouths shut about the deadly arson attack.
Stamatis, who had no part in the actual crime, was asked to burn the clothes used by Lymberis and Angelopoulos so they could not be used as evidence in case if they were arrested. 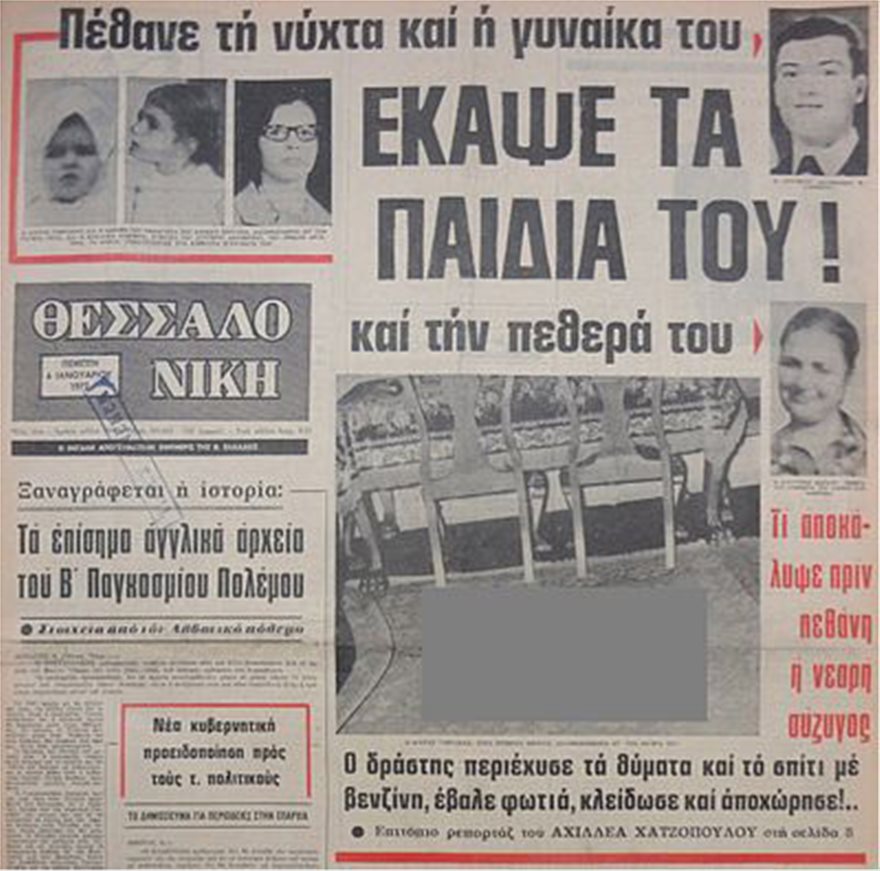 Arrest and trial
Vassiliki Markou’s brother in law, Antonis Stroggyloudis, just happened to pass by the house after the attack and saw smoke pouring out the windows. He rushed in and found his mother-in-law and the two children already dead, but Markou, despite suffering severe burns, was still alive.
Stroggyloudis called the fire service and police. Markou was taken to the hospital, where she died that same day. But before she passed, she was able to tell a relative that the man who set the house on fire was her husband.
Socrates Kapsaskis, the chief of Greece’s forensic department at the time, declared after performing the autopsies on the victims “This is the most horrendous crime ever committed in Greece. I have not seen a more horrific crime in my thirty years as a forensic doctor.”
When police took Lymberis to the station after hearing the testimony of his wife’s relative, he still believed that his wife was already dead when he had left the house.
The burns on his face and body, combined with her relative’s testimony, were enough to invalidate his feeble alibi, so he then confessed to the horrific crime. His two accomplices confessed as well.
Lymberis’ trial commenced on May 5, 1972, with the defendant using as an excuse that the cause of all the problems in his marriage was his mother-in-law. He further claimed that he believed if his home were burned down, his wife and children would leave and come to stay with him.
He flatly denied that he knew Vassiliki and the children were at home that night.
The remaining defendants admitted guilt in the case and apologized to the victim’s family.  The court issued its ruling at noon on Sunday, May 7, 1972. Lymberis and Angelopoulos would receive four separate death sentences, Kapretsos would be sentenced to life in prison, and Stamatis would get three years in prison.
The assembled friends and family of the victims in the courtroom applauded wildly upon the reading of the sentences.
Prison and execution
Lymberis was initially transferred to the Aegina Prisons, where he was held in a special cell in fear that the other prisoners would abuse or kill him for his horrendous crimes. He was then taken to the New Alikarnassos Prison in Heraklion, Crete.
His subsequent request for pardon was rejected.
At 5:50 AM on Friday, August 25, 1972, Lymberis was led to the mountainous area of Dyo Aorakia, to the shooting range used by the Infantry Regiment Officers School. He was accompanied by two priests, who gave him his last Holy Communion.
Prosecutor Antonis Nikolopoulos asked Lymberis if he had a last statement to make, but the prisoner, continuing to keep his head bent down, said that he did not.
Lymberis was then executed by a 12-member firing squad. Only six of the twelve rifles had real bullets – the others had blanks – so that the soldiers would not have the burden on their consciences that it was their bullet that had killed a man.
His body was then buried in Nea Alikarnassos.

Angelopoulos was not executed, since he had not yet become eighteen years of age. His execution was then suspended, and in 1975 his death sentence was commuted to life imprisonment. He was granted pardon and released after 20 years in prison in the early 1990s.
Lymberis was the last person to be executed for any crime in Greece. Capital punishment was abolished for crimes — other than high treason during wartime — in Article 7 of the Greek Constitution, which was ratified in 1975.
In 1997, Greece ratified the Second Optional Protocol to the International Covenant on Civil and Political Rights, aiming for the international abolition of the death penalty. Protocol Number Six of the European Convention on Human Rights (ECHR), providing for the abolition of the death penalty in peacetime, was passed in 1998.
Greece abolished the death penalty for all crimes, even for treason during wartime, in 2004. In 2005, Greece ratified Protocol Number Thirteen of the ECHR, concerning the abolition of the death penalty under any and all circumstances.