By Helen Skopis
August 21, 2019
Facebook
Twitter
WhatsApp
Linkedin
Email
Stoicism is coming home!
This is according to Dr. Alkistis Agio, one of the organizers for the upcoming “Stoicon” event, which is an annual, international conference on modern Stoicism.
The Stoicon 2019 will be taking place in Athens, Greece on Saturday, October 5.  The main event will be followed by the “Stoicon-x Athens” mini-conference on Sunday, October 6th, for participants who would like an extra day to explore and enjoy discussions on the ancient philosophy.
The venue will be the beautiful, modern Cotsen Hall at the American School of Classical Studies in Athens.
The event is expected to attract over 300 participants from all around the world, who share an interest in applying Stoicism to the problems and issues of modern living.
To find out more about the event and its purpose, the Greek Reporter contacted Dr. Agio.
What is Stoicism/Modern Stoicism all about?
Modern Stoicism is an intellectual and popular movement that began at the end of the twentieth century, aimed at reviving Stoicism.
Stoicism is a school of Hellenistic philosophy founded by Zeno of Citium in Athens in the early third century BC, who was greatly inspired by the teachings of Socrates. Stoicism is a philosophy of ethics, with or without a belief in God.
According to its teachings, as social beings, the path to Eudaimonia (i.e. happiness, fulfillment, flourishing) for humans is found in fully accepting the moment as it presents itself; by not allowing oneself to be controlled by the desire for pleasure or fear of pain, by using Reason to understand the world, and by treating others fairly.
The Stoics are especially known for teaching that “Virtue is the only Good” (i.e. being honest and acting honorably and justly). External things — such as wealth and pleasure —are welcome, but should not be pursued as ends in themselves, as they cannot guarantee happiness. Alongside Aristotelian ethics, the Stoic tradition forms one of the major founding approaches to Western virtue ethics, as “The right way to live.”
Many Stoics — such as Seneca and Epictetus — emphasized that because “Virtue is sufficient for happiness,” practitioners of Stoic philosophy could be emotionally resilient to anxiety and misfortune. The phrase “stoic calm” has derived from this philosophy and has greatly affected Christianity, as in the Serenity Prayer: “God, grant me the serenity to accept the things I cannot change, the courage to change the things I can, And wisdom to know the difference.”
“Stoicism has also been called the West’s answer to Buddhism, and it has gained unprecedented popularity in places like Silicon Valley. It’s not by chance that Steve Jobs once said, “I would trade all my technology for an afternoon with Socrates.”

-What will this year’s Stoicon event include?
This is the sixth annual Stoicon. Stoicon is the annual conference of Modern Stoicism, a nonprofit organization run by a multi-disciplinary team of volunteers. Stoicism is coming home after two and a half thousand years.
We have a series of experts who will present a wide variety of themes related to Stoic philosophy that make it relevant to modern people, including: “Stoic Warrior Resilience Training programs of the American Military”, “Stoicism and The Art of Finding Happiness Under Any Circumstances”, “Stoicism, Aristotle, and Environmental Responsibility,” etc.
The event is expected to be sold out and there will be a reception in the School’s renowned gardens afterward, where people can network and mingle.
I have been a leadership trainer for top corporations for over twenty years, where I coached C-suite managers based on my own method for Self-Leadership (“The ALKISTIS Method”), which was inspired by the teachings of Socrates, Plato, Aristotle and Stoicism.
When I learned about Modern Stoicism as a popular movement, I connected with the core committee members, and they embraced me wholeheartedly on their Board of Advisors.
Although Stoicon has taken place in Toronto, London and New York so far, I managed to convince the organizers to hold it in Athens, Greece this year for the first time ever. We are all very excited about this historic event.
I am honored to be working toward a common goal with best-selling authors and Ivy League professors like Donald Robertson, Massimo Pigliucci, Christopher Gill, Meredith Kunz, Ryan Holiday, Anthony Arthur Long, Martha Nussbaum and Chuck Chakrapani.
-What type of person would be interested in attending your event?
All sorts of people have been drawn to Stoicism, including the Roman emperor Marcus Aurelius, America’s founding father George Washington, Admiral James Stockdale, President Bill Clinton, actor Arnold Schwarzenegger, publisher Arianna Huffington, NFL executive Mike Lombardi and NFL star Tom Brady!
They all share its love of wisdom, personal development, excellence, resilience, endurance and mindfulness.
If you’re interested in Stoic philosophy, whatever your background or occupation, this conference is meant for you. Our aim is to make Stoic philosophy accessible to everyone by highlighting its practical relevance to the everyday challenges people face in different aspects of modern life.
I would add that anyone who is Greek or of Greek heritage, should come to discover how ancient Greek philosophy can be practiced every day in life and work. I am constantly surprised by Greeks who are followers of the Christian Orthodox faith, but know very little about Greek philosophy, which is the foundation of Western civilization.
The conference will be held on October 5th and 6th in the English language, and is very affordable, so really there is no excuse for not attending if you are serious about your personal development and finding happiness during this lifetime (and not in the afterlife). As Socrates taught, “Know Thyself” and “An unexamined life is not worth living.”
Dr. Agio maintains that “In today’s consumer-driven, technological society, stress and anxiety are widespread; Stoicism offers a tried and tested philosophy which is thousands of years old.” 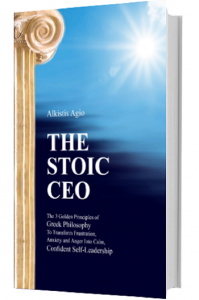 She added that “More and more people are turning to Stoicism for a philosophy that is applicable whether or not you are religious, as it is based on the highest humanist values. It can offer us a moral compass to navigate through the greatest challenges of life.”
Dr. Agio points out that “Like the Olympic Games, although it was born in Greece, it belongs to the world now.”
You may obtain tickets for this extraordinary event by clicking on the link
To download a free summary of Dr. Agios’ book, “The Stoic CEO,” please see the link on the author’s website at: http://www.alkistis.net