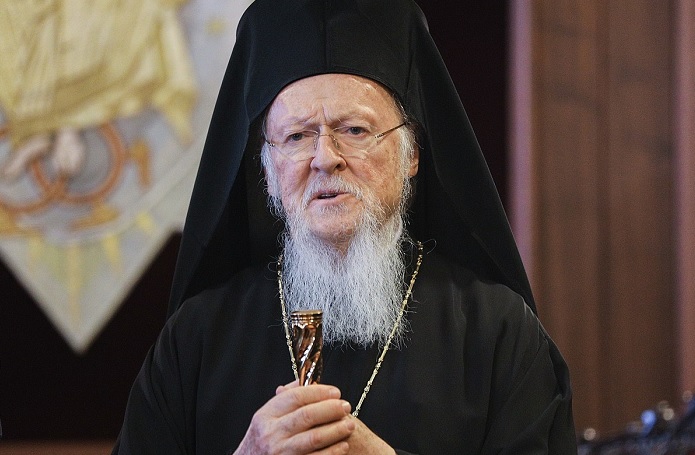 His All-Holiness Ecumenical Patriarch Bartholomew I, the spiritual leader of 300 million Orthodox Christians worldwide, on Friday received the 2019 ECOS® Award for exceptional leadership in environmental protection.

The Ecumenical Patriarch received the prestigious award in honor of his lifetime of environmental advocacy and global influence on environmental protection.

The Award was presented to the Ecumenical Patriarch at his headquarters in Istanbul, Turkey, by Earth Friendly Products’ president and CEO Kelly Vlahakis-Hanks.

Ecumenical Patriarch Bartholomew has played a critical role in environmental advocacy in his role as the leader of the Orthodox Christian Church, proclaiming the importance of spiritual values in determining environmental ethics and actions.

His life’s work to protect the environment earned him the title the “Green Patriarch,” coined in 1996 and formalized by then-Vice President of the United States, and fellow world leader in environmental protection, Al Gore.

In 2008, Time magazine named Ecumenical Patriarch Bartholomew one of its 100 Most Influential People in the World for “defining environmentalism as a spiritual responsibility.”

Earth Friendly Products®, the maker of ECOS® environmentally-friendly cleaning products, established the annual ECOS® Environmental Award to recognize world leaders who are creating powerful impacts to protecting our environment and the health of the earth’s citizens. This is the third year that the award has been given; previous recipients include U.S. Senator from California Kamala Harris, a current candidate for President of the United States.

The award was first established in 2017, as Earth Friendly Products celebrated its 50th anniversary in business. The first award was bestowed on the highest-ranking woman in U.S. history, Speaker of the House Nancy Pelosi.

U.S. Senator Kamala Harris was the second person honored with the ECOS Award, in 2018.

The company which pioneered green cleaning products by managing to eliminate all harmful chemicals used in conventional cleaning supplies was founded in 1967 by Van Vlahakis, a Greek immigrant from Crete.

“Our mission has always been to create household cleaners and personal care products that are safer for people, pets and the planet,” said Kelly Vlahakis-Hanks, President and CEO of Earth Friendly Products. “Our products are a culmination of more than 50 years of innovative green science and a lot of love.”

Also in attendance at the award ceremony was Mike Manatos, an Archon of the Greek Orthodox Church and President of Manatos & Manatos in Washington, D.C.. He stated, “We are honored and humbled that this pioneer in environmental protection through faith has received the ECOS Award. We are excited to also announce the establishment of the `Ecumenical Patriarch Bartholomew Environmental Scholarship’ — a $1,000 scholarship, sponsored by ECOS® and Manatos & Manatos, that will be given each year to a student from his childhood home of Imroz, Turkey, who writes the best essay on the importance of protecting the environment.”

A family-owned and operated company for over 50 years, Earth Friendly Products® is sustainable manufacturer that is the first to achieve the “trifecta” of carbon neutrality, water neutrality, and TRUE Zero Waste Platinum certification.

The company uses 100% renewable energy to make its ECOS® plant-powered cleaners at its U.S. facilities in California, Washington, Illinois, and New Jersey.

ECOS products are sold in over 60 countries, and since 2018 Earth Friendly Products has operated a manufacturing platform which services Europe, the Middle East, and Africa.