Greek Cypriot researcher Dr. Maria Kavallaris recently won the prestigious Good Design Award for 2019 for the 3D printer she designed which prints replicas of different types of cancerous tumors and the cells that surround them.

Professor Kavallaris, the Head of the Tumour Biology and Targeting Program at Children’s Cancer Institute, shared the award with Dr. Lakmali Atapattu, who works with Kavallaris’ group at the Institute.

Dr. Kavallaris, who successfully battled against cancer herself, analyzed cells to develop the cell biology behind the printer and to replicate accurate tumor-like environments. 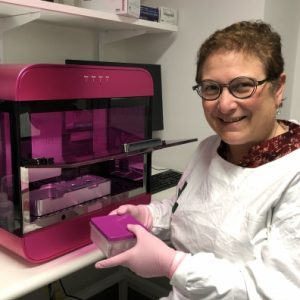 “For the first time, we have a machine that can model cancer disease, therapeutic responses and test new drugs. We can analyze the ways drugs are impacting the survival of the tumour and potentially feed that back to clinicians – even test drugs they may not have thought about giving and reduce exposing patients to undue toxicity,” she stated.

The Good Design Award, the oldest international award for design and innovation in Australia, celebrates the best products and services across the entire nation. It rewards emerging areas of design including those of business model innovation, social impact and sustainability.

Kavallaris’ research focuses on the action and resistance of anticancer drugs, with the aim to develop less toxic cancer therapies using nanotechnology. She won the American Association for Cancer Research’s “Women in Cancer Research Award” in 1997, and in 2015, she was named an “Australian Financial Review/Westpac 100 Woman of Influence.”

This year, Kavallaris was awarded an Order of Australia for her service to the world of science.

“This is an amazing starting point for researchers to use our imaginations and develop cell models to study disease,” she stated upon her reception of the award.

Born in Australia to Greek Cypriot parents, Kavallaris and her family emigrated to Cyprus when she was young, only to return to Australia in the 1970s after the Turkish invasion of Cyprus.

The cancer researcher was diagnosed with cancer herself at the tender age of 21, which she battled successfully. Tragically, her brother later lost his life to the scourge of pancreatic cancer.