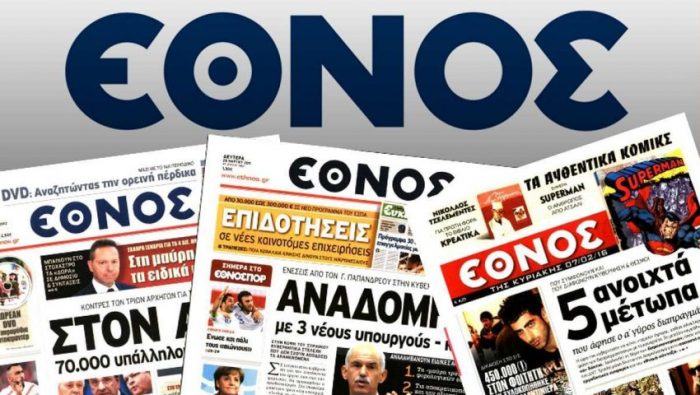 Greece’s historic ”ETHNOS” newspaper announced to the public on Monday that it will suspend publication of its weekday edition beginning on July 31, 2019.
The newspaper announced its ownership’s decision to suspend the daily edition of the paper in a laconic statement published on the newspaper’s website.
The newspaper will continue to be published, but on a weekly basis in the future, only on Sundays.
ETHNOS, which literally means ”The Nation,” was first published in Athens in 1930.
Throughout its history, it has lent critical support to the center-left, progressive parties in Greece.
The newspaper was owned for many years by the firm Pegasus Publishing, which also owned other papers and TV stations in Greece in the past.
In the same year, both the daily and the Sunday edition of the paper were sold to a concern known as ”Dimera Media Investments,” which is owned by Ivan Savvidis.