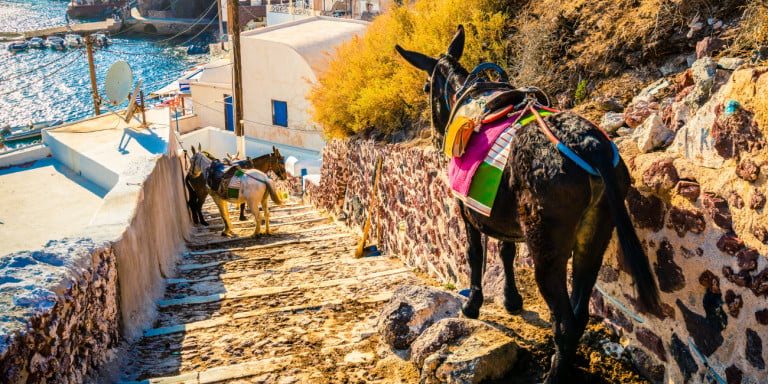 A South African animal welfare activist claimed on Wednesday that he was brutally assaulted and threatened with death while filming the alleged abuse of donkeys on the Greek island of Santorini.
Luke Barritt, a campaigner for the international charity “Network for Animals” (NFA), said he was spotted filming mistreatment and abuse of donkeys by their owners and, together with cameraman, was “attacked” by a group of ten people.
According to Barritt, who has since returned to Cape Town from Greece, he was kicked, struck and threatened that he’d be thrown off a cliff by the donkey’s owners.
“The sheer venom of the donkey owners stunned me. They were kicking me and beating me with the same whips they use on the donkeys. It was a truly frightening experience,” Barritt said.
Some of the mistreatment Barritt said he witnessed included owners making their donkeys climb a 300-meter (985-foot) tall cliff in the scorching sun, with no food, shade or water.
“I escaped, but the worst thing is that there’s no escape for the donkeys. They are forced to climb that cliff from sunrise to sundown. They are not given food or water, so as to not soil the cliff path. The cruelty is horrifying.”
Barritt said he had reported the matter to Greek police, who had promised to take action, but nothing had come of it.
As of Thursday morning there has been no official reaction to the allegations by the authorities in Santorini.
In a letter sent to the Greek Reporter in June, Santorini authorities said that ”The Municipality is against any mistreatment of the animals.”
They clarified, however, that they are not against what they termed ”labor conducted by these animals under the appropriate conditions.”
”In any case of mistreatment, the Police department of Thera (Santorini) is called, which then locates the owner of the animal and enforces what law dictates,” the authorities added.
Related: Fears Grow for “Neglected” Santorini Donkeys (VIDEO)