By Helen Skopis
July 13, 2019
Facebook
Twitter
WhatsApp
Linkedin
Email
American biologist, Suzanne Eaton, was brutally murdered according to the results of the autopsy conducted by the coroner’s office on Crete.
Police on the Greek island of Crete launched a murder investigation after the body of the American scientist was discovered in a cave used as a Nazi bunker during World War II.
Suzanne Eaton, who worked for the Max Planck Institute for Molecular Cell Biology and Genetics, based in Dresden, Germany, was on the Mediterranean island to attend a conference but disappeared on July 2.
The scientist, who loved Crete and was participating at an international conference at the Orthodox Academy’s premises in Kolymbari, Chania for the fifth time, was struck a number of blows to the sides that the perpetrator(s) may have inflicted in order to immobilize her. Her death was caused by suffocation which indicates that her killer probably closed her mouth and nose with his hands.
The authorities estimate that the body of the woman was transferred to the point where it was found after her murder. The possibility of rape remains open, but due to the degree of the body’s decomposition, no safe conclusions could be drawn.  Therefore, DNA material was collected and has been sent for laboratory evaluation. Results are expected next week. 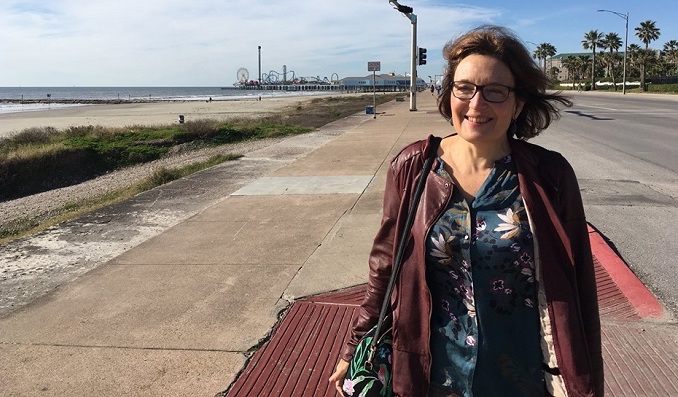 Police officers spoke to two people who saw the 60-year-old biologist a few hours before her disappearance. According to Daily Mail’s envoy in the area, a 85-year-old farmer and an elderly fisherman told the police that they saw Eaton in the village of Afrata, about 4.5km away from the cave where she was found dead.
“I saw her.  I recognized her from the photos. I described the exact clothes she was wearing to the police. She was walking quickly near a bridge and a chapel on the street outside the village. I met her while I was walking. I’m sorry for what happened to her, “said the 85-year-old to the British newspaper.
The police have come to two conclusions derived from data they have collected from the very first day of the investigation.
The first conclusion is that Eaton was murdered a short distance from Kolymbari from where she started her hike, and the second is that she was transferred by the perpetrator(s) to the cave, indicating that there was familiarity with the area.
Because of the nature of the crime, the police started immediately bringing in possible suspects for questioning and the collection of DNA samples so that it can be compared to the DNA found on the clothes and body of the scientist for a possible match.
The prosecuting authorities are sweeping the wider area, checking farmhouses, old warehouses, pens, houses looking for evidence that may help solve the crime.  They are also checking the cars of possible suspects, they are looking to see if they bear bruises or scratches.  They are furthermore tracing their mobiles to check their whereabouts on the day of the disappearance.
Eaton’s family, who was closely following the investigation on Crete, left Greece Saturday morning leaving the investigation in the hands of the Greek Police. The resolution of this difficult murder case is a matter of absolute priority for the police, as they want those responsible for the crime to be punished and because Eaton’s family deserves to get the answers they are looking for.