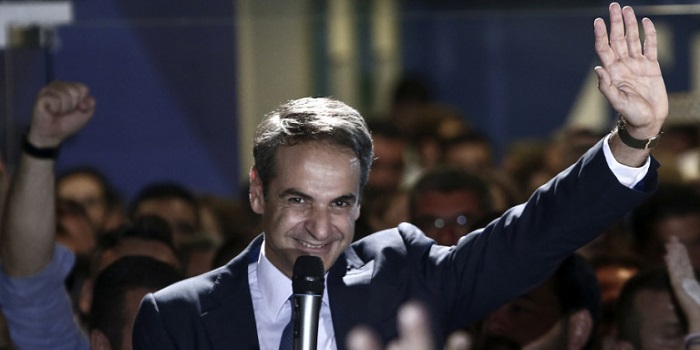 Greeks voted on Sunday to turn a page in the country’s politics by ousting leftist PM Alexis Tsipras and voting overwhelmingly for the conservative opposition New Democracy (ND) led by Kyriakos Mitsotakis.
With almost 80 percent of the votes counted, ND gets 39.7 percent, with SYRIZA following at 31.6 percent.
Results show that ND will be elected with an absolute majority in the 300-seat Parliament. It will get 158 MP’s, whereas SYRIZA will get 86 seats.
Mitsotakis vowed during his victory speech on Sunday night to “work hard to represent all Greeks.” “We are too few to stay divided,” he said.
He added that “society delivered a clear message in favor of growth, job-creation and security” and that “transparency and meritocracy will return to Greece, and our country’s voice in Europe will be strengthened.” 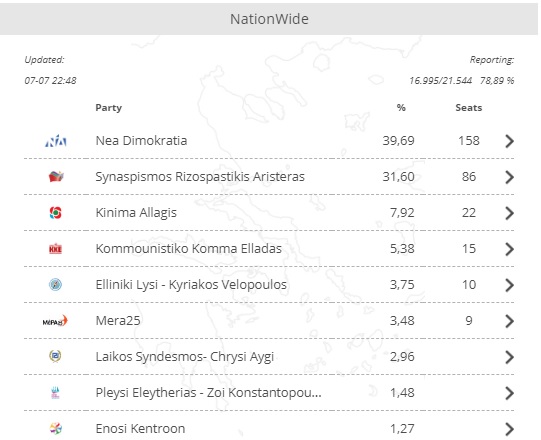 Center-Left Movement for Change is on track to gain 7.9 percent of the vote, followed by the Communist Party at 5.4 percent.
Among the newcomers, MeRA25 anti-austerity party of Tsipras’s former maverick finance minister Yanis Varoufakis, gets 3.5 percent.
Greek Solution, a nationalist, pro-Russia party formed by former journalist and TV salesman Kyriakos Velopoulos, gets 3.7 percent.
Extreme-right Golden Dawn is below the 3 percent threshold required to have parliamentary representation.
Turnout in Sunday’s Greek election reached a new low as according to preliminary estimates abstention reached a record-breaking 44 percent.
If confirmed, it will be the highest voter abstention rate in parliamentary elections in Greece since 1974.