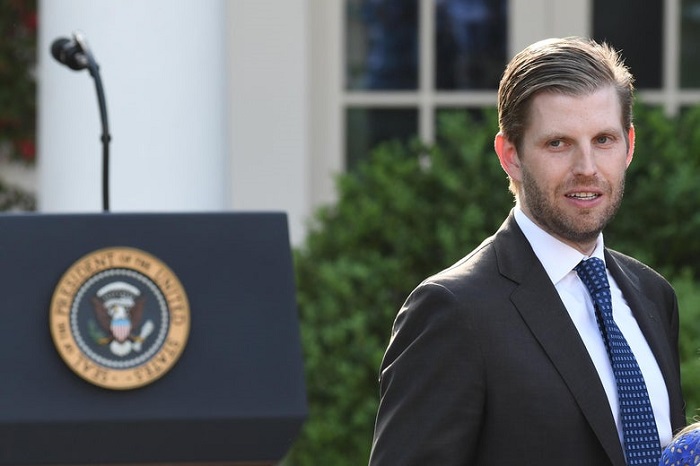 The son of US President Donald Trump has reported that he was recently spat on by an employee at a Greek-owned restaurant in Chicago.

Eric Trump told an interviewer at the Breitbart News site that “It was purely a disgusting act by somebody who clearly has emotional problems.”

Authorities took the woman into custody, but as the Trump Organization told the Chicago Tribune, the president’s son decided not to press charges.

Eric Trump cast blame for the incident, which took place at the upscale cocktail bar and restaurant called “The Aviary,” more broadly upon the Democratic Party.

The Aviary is co-owned by Grant Achatz and Greek American Nick Kokonas, also owners of Alinea, known around the world for its highly inventive food and drinks. But the owners said they weren’t entirely sure what happened.

“What is certain is this: No customer should ever be spit upon. We have not spoken with the employee, but our human resources team has. In the meantime, placed her on leave,” they said.

The business also said it is being subjected to online harassment in the wake of the incident.

“Hundreds of people are calling for the demise of our business, threatening our employees, and posting fake reviews… they are wrong to do so based on the actions of a lone individual,” the restaurant said in the statement. “So too, however, are those people wrong who are praising this as an act of civil disobedience.”

Born and raised in Chicago, Kokonas graduated from Colgate University with a degree in philosophy. His restaurants Next, Alinea, and The Aviary served as a testing and development ground for his proprietary ticketing system called Tock. Kokonas’s system allows for dynamic pricing for restaurant tickets/reservations.