By Tasos Kokkinidis
May 26, 2019
Facebook
Twitter
WhatsApp
Linkedin
Email
The Greek conservative opposition New Democracy Party (ND) has won the European and local elections in Greece, dealing a severe blow to PM Alexis Tsipras and his ruling SYRIZA party.
Official forecasts say that ND has triumphed by almost nine percentage points over SYRIZA, winning 32.8 percent of the popular vote, with SYRIZA falling short with 24 percent of the popular vote.
Speaking after the first official results were announced, ND Party leader Kyriakos Mitsotakis said that the current government has lost its legitimacy.
“Greece is in need of a new government. PM Tsipras must assume his responsibility and resign. The country needs elections,” Mitsotakis declared.
He added that he is striving to unite all Greeks, irrespective of who they voted for. “The sun is rising on a much brighter Greece,” he added.
The center-left Movement for Change Party is coming in third with 7.8 percent, the Communist Party received 5.5 percent, the extreme rightist party Golden Dawn garnered 4.9 percent, and the anti-European Greek Solution party (Elliniki Lysi) attracted 4.1 percent of votes.
Official projections by Singular Logic: 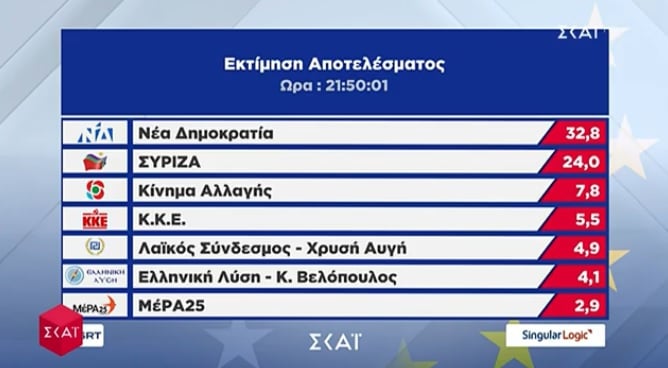 The governing SYRIZA Party is also being dealt a blow currently in regional and local elections across Greece.
Five Greek regions are positioned to elect a governor without a run-off next week, due to candidates winning more than 50 percent of the vote. New Democracy candidates are expected to win in Central Macedonia, Epirus, Thessaly, and the South Aegean while Crete goes to SYRIZA/KINAL.
(This is a developing story)