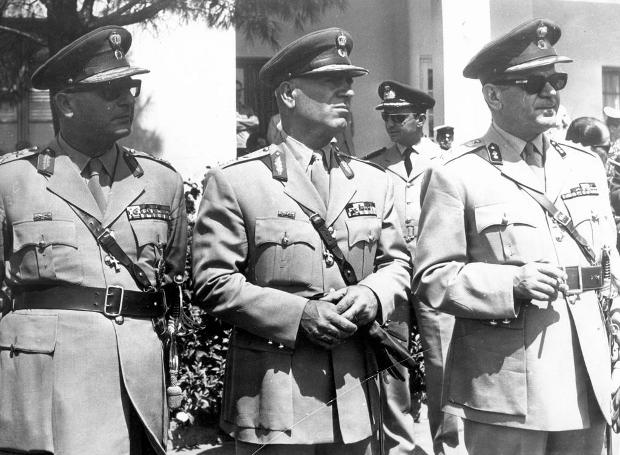 (Makarezos, Pattakos, Papadopoulos)
For the army colonels who overthrew the government and established a seven-year long cruel dictatorship, April 21, 1967 was the day of the Revolution and the rebirth of the Greek nation. For most Greeks, however, it is a date they would like to be able to forget.
For the people who were jailed and tortured, it is a date which brings back dark memories and nightmares, even after half a century. The same applies for the families of those who were killed by the junta.
Many politicians, as well as Constantine, the young king of Greece, feared that the army would most likely intervene to get Greece out of the political turmoil of the mid 1960s. It was expected that it would be the generals; however, it was three lower-ranking officers who took everyone by surprise when, in the space of one day, they took over power.
It was Colonel Georgios Papadopoulos, Brigadier General Stylianos Pattakos and Colonel Nikolaos Makarezos who ordered the tanks to roll in Athens. Greek soldiers took over the most crucial areas of the capital, then arrested all the key politicians and Lieutenant General Grigorios Spandidakis, the Commander-in-Chief of the Greek Army. 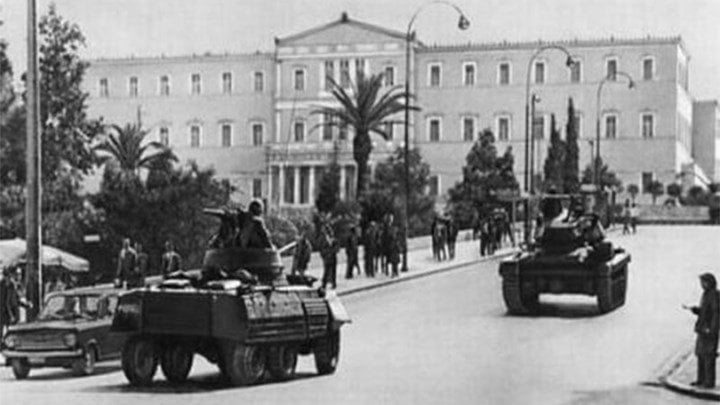 Tanks rolling at Athens’ Syntagma Square
On the morning of April 21st, 1967, Greeks woke up to a nightmare: the ominous rumble of tanks, occasional rifle shots and military hymns playing on the radio. Then came the sinister announcement on the radio: “The Hellenic Armed Forces undertake the governance of the country”.
After the politicians, many individuals,  both prominent figures and ordinary citizens, who belonged to Greece’s Left, were arrested in a methodical manner. The 10,000 names had already been placed on a list by the military. Those rounded up included personalities such as composer Mikis Theodorakis and other lesser-known artists and academics.
The excuse of “the colonels” as the junta was described by many – was that Greece was in grave danger of falling into the hands of the communists. The “black-listed” 10,000 individuals were sent to prison or to the Yaros island concentration camp. The least fortunate of all the thousands of political prisoners suffered brutal tortures, leaving them marked for life.
The junta suspended 11 articles of Greece’s Constitution to establish the regime. Freedom of speech ceased to exist, with strict censorship rules instituted for radio, newspapers and, later, television.
At the same time, many Greeks became informants to the police, spying on their neighbors. Anyone could get arrested if someone told the police that the “culprit” had spoken badly about the colonels and the regime. 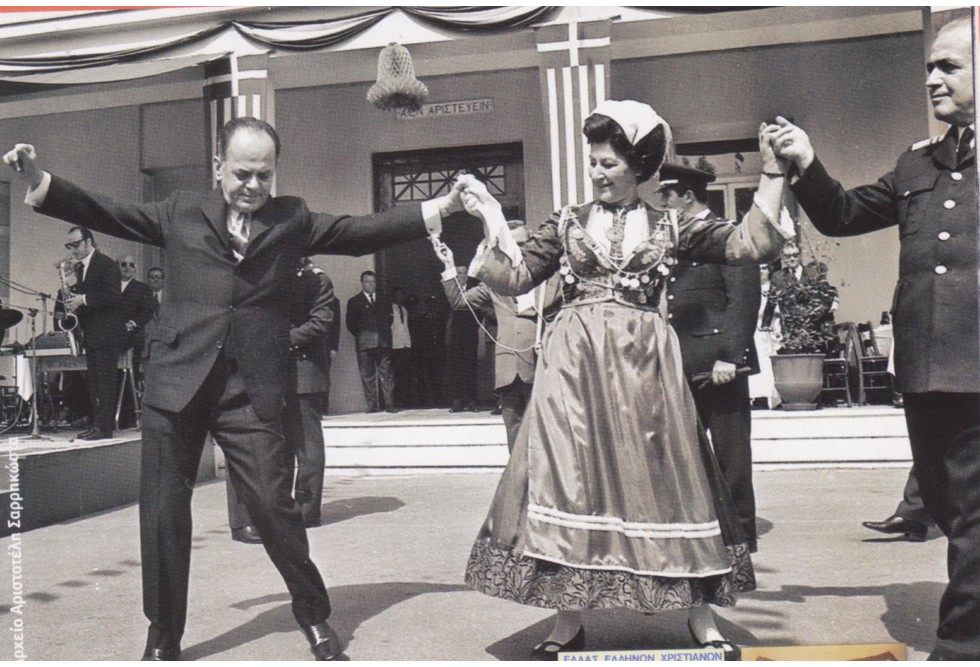 Colonel Papadopoulos leading a folk dance
As a smokescreen to hide all their shameful acts against their own people – what then-U.S. Ambassador Phillips Talbot had called “a rape of democracy” – the dictators started a campaign of public works, such as building new schools, hospitals, factories, stadiums and roads. That made them likeable to some Greeks, but it was not enough to make up for what was happening in the country.
Realizing that they were isolated from the rest of Europe, and condemned by most Greeks and especially those who were in self-imposed exile, the junta made some efforts to be more democratic, more human, more likeable. They held huge public celebrations on the April 21st anniversary and other feasts attended by thousands of Greeks.
The resistance inside Greece and abroad continued throughout the seven long years of the colonels’ rule. Politicians, intellectuals, artists and academics who lived abroad joined their voices to tell the world that the colonels were violating human rights and were holding Greece captive inside their ruthless regime.
When the junta finally succumbed to the anger of the repressed Greek people and the outcry from around the globe, they decided to call elections. First, Colonel Papadopoulos appointed Spyridon Markezinis as Prime Minister of Greece, and then appointed himself President of the Republic.
Some people believed that they would be democratic elections, unlike the rigged 1968 referendum to change the Constitution. No one will ever know what could have happened if it hadn’t been for the uprising of the Polytechneio.
In November of 1973, a few hundred students and other Greek citizens, fed up with the repression of the regime, occupied the building of the National Technical University of Athens and called for the colonels to leave power. The events of November 17, when the premises of the university were brutally cleared out by the military, left several dead.
The turmoil gave an opportunity to hardliner Colonel Dimitrios Ioannidis to topple Papadopoulos on November 25 — with yet another coup. His ambitious plan to overthrow the President of Cyprus, Archbishop Makarios, so that Greece and Cyprus could unite, caused the Turkish invasion of the island on July 20, 1974. Only three days later, Ioannidis resigned, finally opening the way for Constantine Karamanlis to return to Greece and form a democratic government.
The nightmarish seven-year long dictatorship of the colonels had finally ended for Greece — but the plight of Cyprus had only begun, as the northern part of the island is still occupied by Turkey to this day.