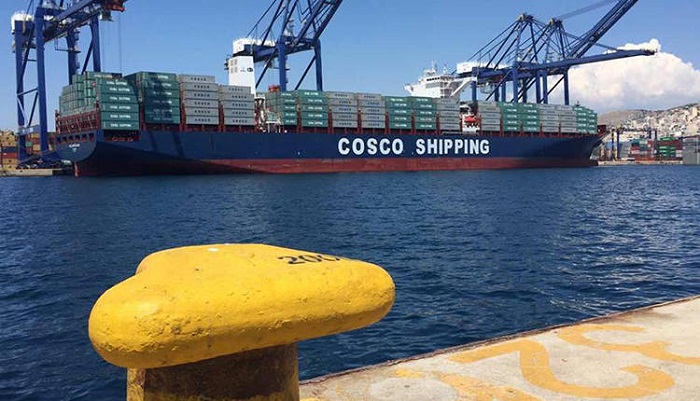 Greece’s Central Archaeological Council (KAS) derailed the multi-million euro investment program of China’s Cosco Shipping consortium on Tuesday, ruling that some proposed projects at the port of Piraeus would affect archaeological sites.
In a marathon discussion lasting until midnight, KAS, in a unanimous decision, rejected the Piraeus Port Authority’s (OLP) plan to create a shopping mall, a floating shiprepair dock and a luxury hotel, because of antiquities concerns in the area.
KAS said the area scheduled to be turned into a large cruise ship passenger station in the south zone of the port of Piraeus, the largest Greek port, cannot also accommodate a large mall, nearly 24,000 sq.metres in surface area.
A luxury hotel planned at Porto Leone, near the ruins of the Walls, must be lower in height and smaller in area, KAS advised.
On Salamis Island, at the straits of which ancient Greeks faced and defeated the Persian navy in a landmark battle of the 5th century BC, the Council said the sites of Kynosoura and Ambelakia must be protected, and recommended that the current shipyards facing them across the way on the mainland be removed. In addition, the floating ship repair dock envisaged by OLP off the islet of Psitalia should be placed elsewhere to avoid obscuring the archaeological sites.
The Shanghai-based Cosco conglomerate, a global giant in shipping and port management, which bought a 51 percent stake in Greece’s largest port in 2016, has transformed the once-dingy port into the second-busiest in the the European Union.
Company officials told the Chinese news agency Xinhua that their aim is to make it the largest in the EU as well. Cosco plans to use its expertise, as well as Piraeus’ key geographical position on the European Union’s southern flank, to tie the transport of shipped goods to plans to improve railway links.
Piraeus is the key link in what China calls its “Belt and Road Initiative,” a type of modern Silk Road, to increase trade within the European Union. Local officials have stated that the company’s presence has already improved the economy, and it has spruced up the formerly run-down port area.