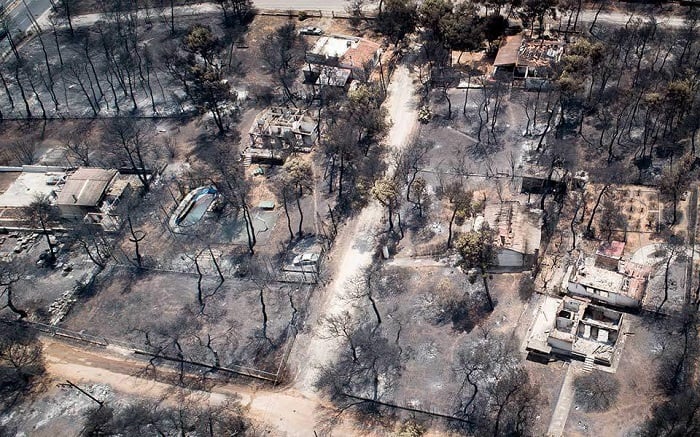 The Athens Prosecutor’s Office announced on Tuesday that twenty people will be brought up on charges related to the deadly fire at the resort of Mati last July, which claimed the lives of one hundred people.
The individuals charged include regional governor Rena Dourou, mayors Elias Psinakis and Evangelos Bournous and high-ranking officials of the fire brigade, the police and the General Secretariat for Civil Protection. The charges come after seven months of investigation into the causes of the inferno as well as how the fire was fought.
The individuals will be called to answer for a series of offenses including negligent manslaughter, which, upon conviction, could bring jail sentences of up to five years for each person charged.
A 65-year-old suspect who allegedly started the fire a few miles west of Mati, at Daou Penteli, is also among those charged.
The deadly inferno in east Attica, which occurred on July 23, 2018, was the second-deadliest wildfire in the entire world in the 21st century, after the 2009 “Black Saturday” bushfires in Australia, which killed 180 people.
The flames were so intense that they trapped and burned people inside their houses and cars, even just a few meters away from beaches. Thousands of vehicles and houses were destroyed before the fire was finally brought under control hours later.