Hippocrates Found &quot;Not Guilty&quot; in Trial 2,300 Years After the Fact 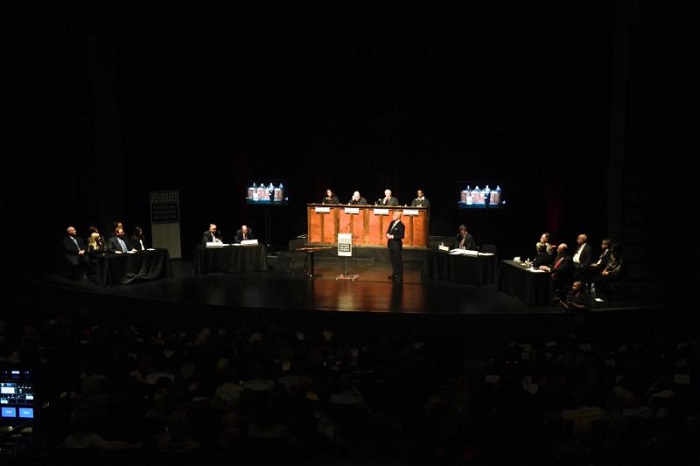 A non-scripted courtroom drama gripped the audience on February 20 at the Harris Theater for Music and Dance as well-known lawyers debated a case which was originally tried more than 2,300 years ago.

Following an evening of compelling and timely debate with proceedings and decisions by notable judges and jurors, a jury composed of community leaders, legal and medical professionals and academics presented their verdict of “Not Guilty” to the panel of federal and state court judges.

The modern-day court debated whether the great Greek physician was guilty of violating his own oath (later named after him as the Hippocratic Oath) when administering medical care to the dying King of Thebes.

The King, desperate to be cured, offered Hippocrates many treasures and riches for remedies to his many ailments. Upon his death, the king’s son and heir charged Hippocrates for violating the oath he had written when taking up his medical practice, citing that Hippocrates stole his father’s last days.

Arguments from both prosecution and defense were convincing, and many in the audience of hundreds stated the case presented an ethical and professional challenge.

A jury of twelve esteemed jurors from the community was impaneled for the trial. In the end, the breakdown of the jury’s verdict was three who saw Hippocrates as guilty and nine who voted not guilty.

The jury’s verdict was supported by hundreds of attendees, when the scales of justice were literally tipped to “Not Guilty” by the majority of the audience, who also voted, using chips.

Indeed, the case against Hippocrates was strong, and it was a difficult decision for all.

“Presenting The Trial of Hippocrates as our sixth installment of our trial series was a huge success,” National Hellenic Museum President Dr. Laura Calamos stated.

“The participating judges, lawyers and jurors prepared their cases to the highest quality, and the debate the audience experienced had us all on the edge of our seats. This is one of the most engaging events the Museum holds each year, and this year was certainly no exception!” she added.

“This truly unique event brings Hellenism alive, including our love of learning, by prompting critical thinking and citizen involvement in decision-making. It’s not every day that we as ordinary individuals get to listen to some of the best attorneys in the state argue a case with all the authentic drama as if it’s an official trial, the museum president added.

“At the end of the courtroom presentations last night, our audience came together as was done in ancient times, each casting their individual ballot, which resulted in a ‘Not Guilty’ verdict. Although an ancient story, questioning the quality of healthcare at the end of life is still being debated today, just as it was thousands of years ago,” said Dr. Calamos.

“I often hear the question, “But what does the Museum DO?” There is no better example than the Trial. We celebrate and portray our Greek culture and our Hellenic legacy through events like Trial, educational classes for all ages, exhibits and programs. We accomplish this through the tireless work of our staff and volunteers along with your support.”

Dr. Peter Angelos, Associate Director of the MacLean Center for Clinical Medical Ethics at the University of Chicago, served as the Expert Witness. He was examined by attorney Christina Faklis Adair of the Cook County’s State Attorney’s Office.

Andrea Darlas, an award-winning radio and television news anchor and reporter at WGN Radio and WGN-TV, opened the trial as the Moderator.

Members of the Jury

All photos courtesy of the National Hellenic Museum