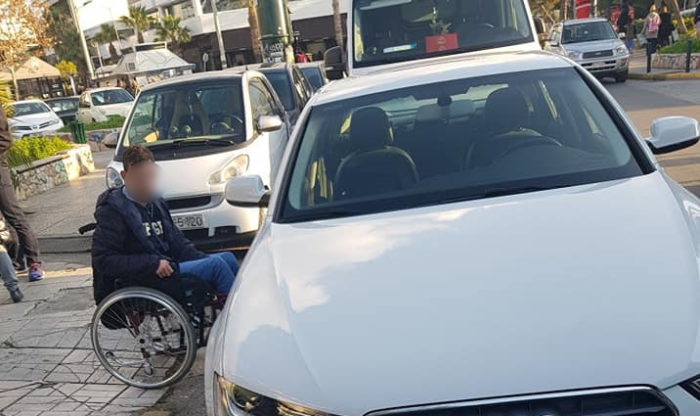 A Facebook post by a father of a 17-year-old disabled Athens boy went viral when his son’s wheelchair got stuck on a sidewalk in the city center due to an unlawfully parked car which blocked access to the street.
The incident occurred last week, when the father and his son tried to cross one of the main streets in Athens. Blocked by a car which was parked in front of them and surrounded by other cars, the unlucky pair was stopped in their tracks.
The father decided to stand still next to his son and wait until the thoughtless driver returned and removed his or her car from the handicapped crossing area.
Pedestrians who saw the father and his son were also upset, and decided to stay with them and await for the driver’s return.
Fifty minutes later, the driver came back. When asked about the reasons why he parked in such a way he had nothing to say; he simply said he was “in a hurry” and he had to leave.
This incident, and others like it, have become an example of how things have gone wrong in Greece regarding the rights of disabled people in public spaces.
There is a complete lack of enforcement by the authorities, with fines rarely being imposed in such cases. There is a kind of apathy that is, unfortunately, one of the main characteristics of most people in Greek society in regard to the rights of the disabled. These factors have created an atmosphere in which incidents such as these are considered ”normal” in Greece.
The everyday life of disabled people in most Greek cities and towns has been described by many as a ”living hell”.
Despite the great progress that has been made over the last twenty years, with new accessibility infrastructure for sidewalks, transportation, hotels and public buildings, the situation is far from being satisfactory — or even tolerable.
Every year, local people and tourists witness incidents that could only be described as unacceptable and degrading for the dignity of people with disabilities and their caregivers.
This sorry state of affairs in Greece has driven many people to use the power of social media by making this and other incidents go viral. They demand that the Greek state focus on educating the younger generation about the rights of disabled people, and impose appropriate fines on all those who disregard the law.
If the Greek state does not begin to take incidents like this seriously, thousands of people will have to continue struggling for something the rest of society takes for granted — the basic right to go anywhere you need to go in your own city or town.