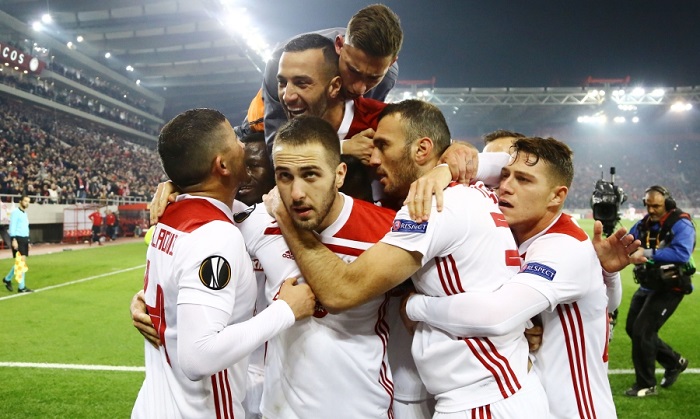 Olympiacos pulled off a stunning 3-1 Europa League win over AC Milan which put them into the last 32 of the Europa League.
The Piraeus club is the only Greek team left in Europe after PAOK and AEK crashed out of the Europa and Champions League respectively.
All the Greek goals came in a thrilling second half. After an hour’s play with plenty of chances but no goals, Pape Abou Cisse opened the score with a header.
Milan defender Cristian Zapata scored an own-goal to make it 2-0 for Olympiacos in the 70th minute. However, the defender went from villain to hero as he pulled one back for his side two minutes later.
Yet Milan’s defensive frailty was exposed when Konstantinos Fortounis scored from the penalty spot in the 81st minute to give his side the win that left them second in Group F with 10 points.
Joyous scenes played out at the end of the match as hundreds of supporters streamed onto the pitch to celebrate.
Olympiacos edged out the seven-time European champions on goal difference, and progressed along with group winners Real Betis.


PAOK crashes out
BATE Borisiov sent PAOK crashing out of the Europa League in humiliating fashion on Thursday after defeating Razvan Lucescu’s side 3-1 at the Toumba.
After making a promising start, PAOK faded badly and was outplayed and outfought as a double from Nikolai Signevich and a goal from Maksim Skavysh sealed a comfortable win for the Belorussian champions.
Aleksandar Prijovic pulled a goal back from close range early in the second half and PAOK was later boosted by the dismissal of Signevich, but they failed to score any further goals.