Tsipras Says Greece is Bridge Between Russia and EU 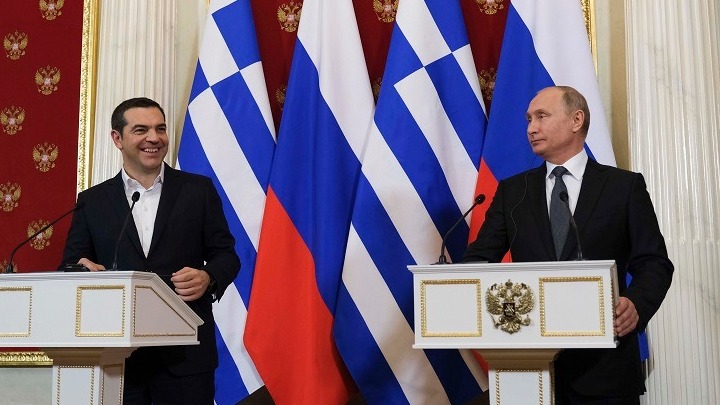 Greece can be the bridge between Russia and the EU and NATO, said Greek Prime Minister Alexis Tsipras on Friday in a joint press conference with Russian President Vladimir Putin in Moscow.
“The important historical background of Greek-Russian relations has allowed us to build a stable and dynamic relationship over time,” the Greek prime minister said.
Tsipras noted that his visit takes place on the 190th anniversary of the establishment of diplomatic relations between the two countries. He said that the strong connection between the two countries is based on historical, religious, cultural and spiritual ties between the peoples of Russia and Greece.
“I believe that this important historical background has allowed us to build a stable and dynamic relationship over time,” the Greek prime minister stated in his remarks.  He added that theirs is “a relationship that has enabled us to maintain good dialogue and cooperation, even when geopolitical developments separated us.”
Referring the diplomatic tiff which took place between the two countries in the summer of 2018, Tsipras said that open dialogue has helped them return to the necessary atmosphere of mutual respect and understanding.
The episode, which included allegations that Russian diplomats had attempted to bribe individuals, led to the expulsion of each country’s diplomats. The alleged bribery and interference took place as the country formerly known as Macedonia changed its name to “The Northern Republic of Macedonia” and was rumored to be joining NATO.
Putin states 2018 diplomatic issue is closed
On his part, the Russian president said that there are many prospects that unite the two countries, underlining the cooperation in investments and trade.
Speaking in economic terms, the Russian president noted that during the last year, bilateral trade increased by 27 percent to $3.7 billion.
Putin also referred to the progress made in the cooperation between Greece and Russia in energy, culture and tourism.
Putin said that a record number of his compatriots visited Greece last year, and  the number is expected to reach one million visitors in 2019.
The Russian president stressed at the end of his remarks that the summer 2018 expulsion of diplomats by both sides is an issue that he considers closed.