The Mycenaean Palace Throne Room has been recreated in Germany at the Badisches Landes Schloss Karlsruhe Museum as part of an exhibit which opened on December 1st.

The spectacular exhibit features over four hundred ancient Mycenaean artifacts on loan from Greece and Cyprus, most of them traveling for the first time out of the country. The highlight of all the antiquities is the legendary golden mask that initially was believed to belong to King Agamemnon.

They were loaned by several Ephorates of Antiquities in Greece, including Chania, Messinia, Ileia, Achaia, Kefalonia – Ithaca, and Etoloakarnania-Lefkada. The Ephorates of Argolida, Athens, Viotia, Karditsa, Magnisia and Pieria also contributed priceless items from their collections.

“The visitors will be guided through an ancient world and can experience Mycenaean culture from its beginnings to its downfall,” Museum co-curator Bernhard Steinmann told Deutsche Welle. 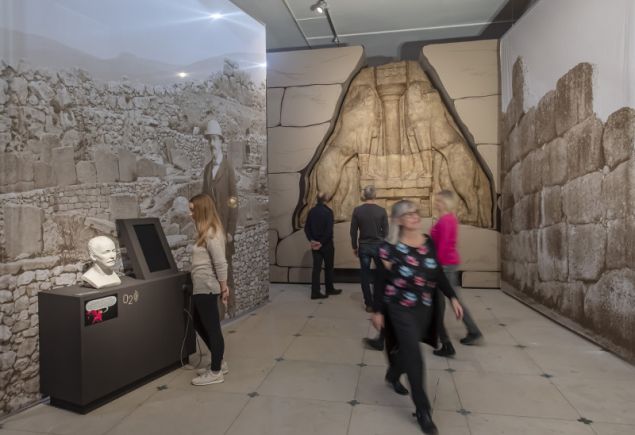 A great deal of audiovisual material is used to enable visitors to better understand the artifacts on display. A recreation of the old Lysine Gate from Mycenae’s Museum of the University of Amsterdam welcomes visitors to the exhibit.

Among the priceless objects in the show are the golden death mask and a tombstone from the Mycenaean Grave Circle. Gold rings and an agate seal from the grave of the Gripa Warrior in Pylos are also included in the Mycenaean display.

There is also the famous bronze “crown” with its golden flower, as well as frescoes from Messinia and Thebes. Many other objects, discovered in warrior burial vaults from Chania, Achaia, Aitoloakarnania and Ilia, are included in the exhibit.

The Mycenaean civilization dominated the Peloponnesian Peninsula from the 15th to the 12th century BC, engaging in trading with other civilizations and featuring the building of magnificent cities.

Yet the rich Mycenaean culture mysteriously disappeared 400 years later, the cause of its decline still unknown. Ornate tombs, priceless jewelry, fine ceramics and many bronze weapons comprise the remnants of that once-great civilization. 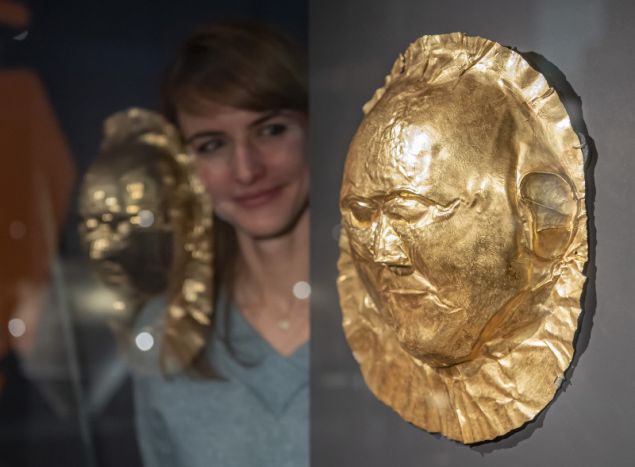