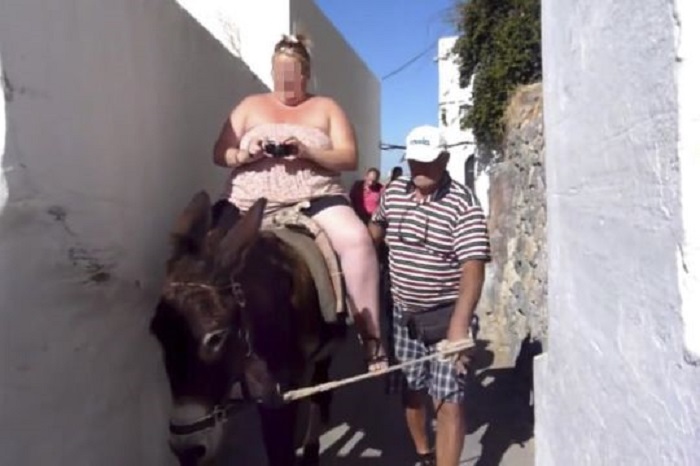 Greece’s Ministry of Rural Development and Food has published a new set of regulations regarding the treatment of animals working with humans.
The new regulations were drafted on August 2, following multiple complaints about the treatment of donkeys, mules and horses.
In particular, foreign media coverage focused on donkeys giving tourists rides in Santorini.
According to the new regulations animals cannot be forced to carry more than one-third of their weight, a measure that excludes obese tourists from riding on them in the popular island.
The move by the Greek authorities follows animal activists on Santorini and other Aegean islands claiming donkeys were being forced to carry ever-heavier loads while they work long hours, seven days a week without shelter, rest and water – leaving them with spinal injuries and open wounds from ill-fitting saddles.
Last July a protest took place on the island by animal welfare against what they call brutal treatment of the donkeys.
In May, a report in the U.K.’s Daily Mail newspaper claimed animal welfare activists are urging the donkey keepers to provide the animals with appropriate shade, rest and water for the demanding work.
The paper claimed the donkeys make four or five return journeys a day during the height of the tourist season, often in temperatures of more than 30C (86F).
Animals were reportedly seen licking shadowy parts of nearby stone walls in an attempt to find moisture.
Reports of neglect, overwork and mistreatment have lingered for years. In 2013, the MyGreece travel blog urged visitors to Santorini not to pay the €5 ($6) charge to ride on the animals, claiming:
“Though the donkeys might look ‘cute,’ and the rides might appear to be a harmless and fun tourist attraction, travellers who use the mules as transportation actually contribute to animal abuse, according to animal welfare organizations and frequent visitors to the island who have personally witnessed handlers mistreating their donkeys.”

Greek health authorities announced on Monday that the benefits of the AstraZeneca vaccine against Covid-19 far outweigh the risks associated with thrombosis.
Europe