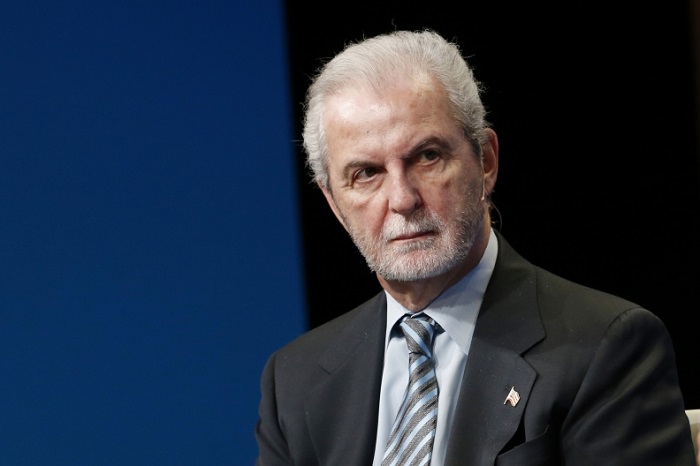 Vietnam veteran and legendary Greek-American entrepreneur John Calamos was honored along with Dean Metropoulos for his contribution to Hellenism in the U.S. at the the National Hellenic Society’s (NHS) Heritage Weekend in Las Vegas on Saturday.

Speaking to Anastasios Papapostolou and the Greek Reporter, Calamos expressed his appreciation for the award, saying that he hopes it will inspire future generations to learn about Greek history and philosophy.

The founder and chairman of Calamos Investments said that “Hellenism is very important because as I look back to my history I think it was important to my success.”

In college, he reveals, he read about Greek philosophy and Socrates in particular.

John Calamos, a first generation Greek, born in Chicago, says that being Greek at the time was not easy. He grew up in the grocery store of his parents where he learned about Greek values.

“My mother and father were dedicated to work and I think my work ethic came from my parents that worked so hard. This was very beneficial for me in the future,” he says.

He was lucky to be the only child in the family to go to college, before he joined the U.S. Air force in the 60s.

“Becoming an Air Force pilot was great experience for me,” he says, as it provided him with the necessary skills for his future career; namely the value of acknowledging that one should be a team player and that one should plan ahead the next mission.

It was at that time in the late 60’s, fighting a war in Vietnam, when he started thinking about managing risks in the markets and convertible securities.

He eventually established Calamos Investments in 1977 and he became so successful that he is often quoted as an authority on risk-managed investment strategies, markets and the economy.

“Managing risks for over 40 years my company has become very successful,” says the self-made billionaire with an estimated net worth of 2.7 billion dollars according to Forbes.

After decades in the business of risk management he still hungry for success.

His other passion is Greece and spreading Hellenism in USA. He founded the Hellenic Museum in Chicago which he hopes “can teach the next generation the value system of Hellenism and its history.”

He reveals he is concerned that the current generation does not seem to espouse as enthusiastically the value system of previous Greek American generations, but he vows to keep on helping promoting Hellenism in the US and abroad.

He thinks that the key is “critical thinking”.

“Going to college should not be about getting a future job. If you learn how to think you will have the passion and you will eventually pick up the right job,” he adds.