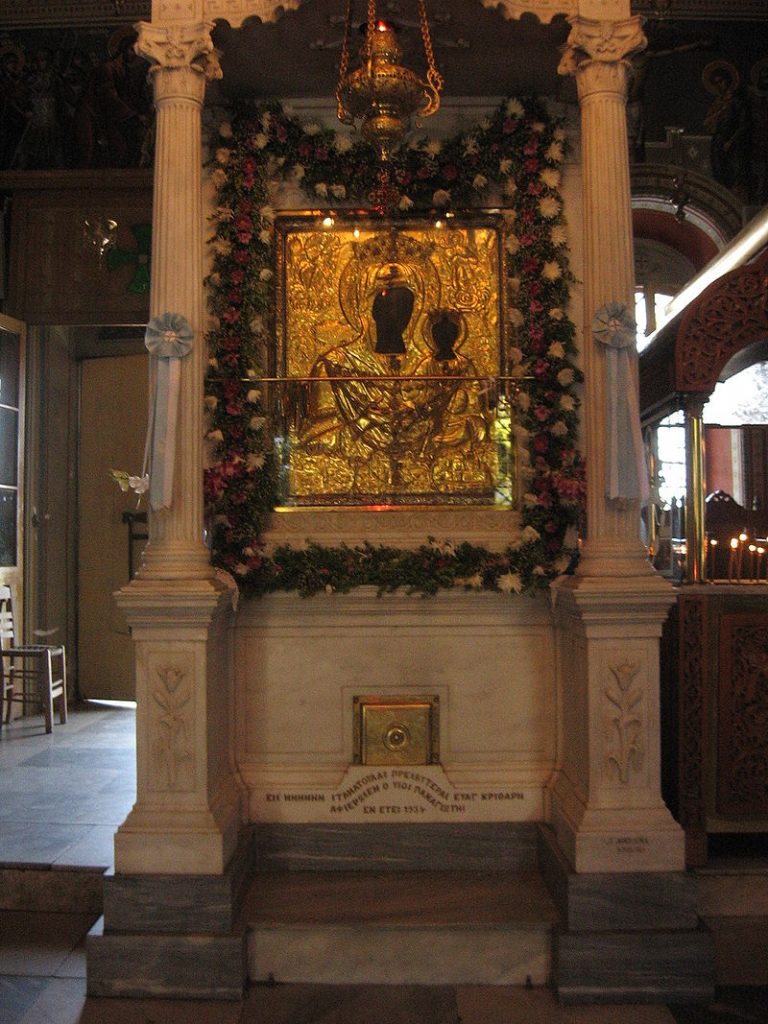 On September 24, 40 days after the Dormition of Virgin Mary, the Greek Orthodox Church celebrates Panagia Myrtidiotissa, the holy icon of Our Lady on Kythera that, according to legend, has miraculous properties.
Panagia Myrtidiotissa means Our Lady of the Myrtle — the name comes from Greek Orthodox traditions which speak of a holy icon that was found by a shepherd in a myrtle bush. Virgin Mary appeared to the shepherd 40 days after her Dormition and told him to search for the icon and that every time he would look for it, he would find it in the same place. As the shepherd kneeled to pray, he turned around and found it inside the myrtle and took it home.
The next day, when the shepherd woke up, the holy icon was missing. He went back to the myrtle and found it there. He took it home and the same thing happened the next day. So the man realized that he should leave the holy icon where he found it, inside the myrtle bush, and that it should not be removed again.
According to tradition, the icon was found in 1160, or in the 15th century. The legend was incorporated on the icon itself, in its lower part, by artist Nikolaos Theophilos in 1837. The holy icon of Panagia Myrtidiotissa is treasured by Kythera residents, Greek Orthodox Christians across the country and diaspora Greeks as well. 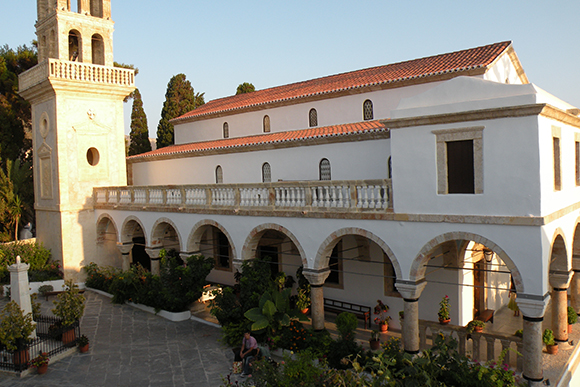 The sanctuary of Panagia Myrtidiotissa is complex that has a basilica with a raised central aisle, a loft in the lowest level with the first temple of the Virgin Mary. This is where the icon is placed.
The monastery building has a multitude of cells, north and south of the church. Pilgrims stay there during the Assumption feast. The bell-house in the north-east of the church is made of carved limestone. It is 26 meters high, with an impressive arc-like structure in all sides and four floors.
Then there is the chapel of the Holy Trinity, constructed in the post-Byzantine era. it is a museum with holy icons and a library with a reading room.
The temple of the Virgin Mary is aligned with the rocky opening. There is a shallow niche in the north, which houses the icon of Panagia Myrtidiotissa, at the place it was found by the shepherd.
The newer church was built in 1841-1857 by abbot Agathaggelos Kalligeros (1799 – 1895). It is a three aisled basilica with an impressive marble winged altarpiece, work of the artist Iakovos Varoutis, from Tinos, built in 1856. The impressive bell-tower is 26 meters high and it was adorned by artist Nikolaos Fatseas (Fouriaris) from Kythera in 1888. The church holds a special service on September 24th, in memory of the miraculous healing of a person who was paralyzed, as well as for the liturgies of the 40 days from the Dormition of  Virgin Mary.