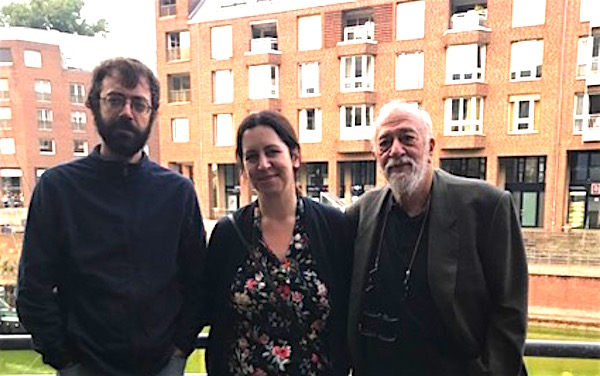 By Aspasia Zontanou
Director Bernd Desinger, of the Filmmuseum Blackbox, was accompanied by Greek General Consul in Düsseldorf, Maria Papakonstantinou, to welcome the film “The Last Note”. Together with curator Eleni Giannakoudi, responsible for the program and organisation of the Greek Filmclub Voulgaris was introduced as the most influential and important Greek director next to Theo Aggelopoulos.

They presented to the audience how the drama film “The Last Note” (2017) was based on the shooting of 200 Greek prisoners on May 1st 1944 in Kaisariani by German Nazi occupiers.

The massacre was in retaliation for killing a German General by Greek resistance fighters, and especially seems to fit into the current political situation referring to the riots in the town of Chemnitz (of the former East Germany) which saw far right demonstrators performing Nazi salutes last week.

Voulgaris mentioned that it was the first time that all members of his family worked together: his well-known wife, writer Ioanna Karistianni being responsible for the script, son Alexander, also a director and music composer, created a musical dialogue between the German and Greek culture using elements from the classical music as well as Greek traditional music (Crete and Pontian) and daughter Constantina Voulgaris as the casting director.

The film was shot in Chania Crete with the help of almost 2000 local citizens who volunteered to be part of the project. Actor Andreas Konstantinou played the leading role of prisoner Napoleon Sukatzidis. This prisoner is enlisted to serve as interpreter to the German SS Commander Karl Fischer of the Chaidarie Camp played by actor André Hennicke. The film created a dramatic interplay between prisoner Sukatzidis and his fiancé Chara played by actress Melia Kreiling.

The lives of fellow prisoners are interwoven with Sukatzidis’ personal struggle which dramatically culminates the moment he gets the option to be excluded from execution if he is willing to cooperate with Commander Fischer.

The conclusion of the film brought the audience to an extended standing ovation followed by a podium discussion with both Pantelis and Alexander Voulgaris answering questions from the mostly German and Greek cinephiles.

Starting on the 6th September, the Film Museum will host Greek Films every Thursday until June 2019.

Dinos Christianopoulos, “The Poet of Thessaloniki,” Was Rebetiko Scholar