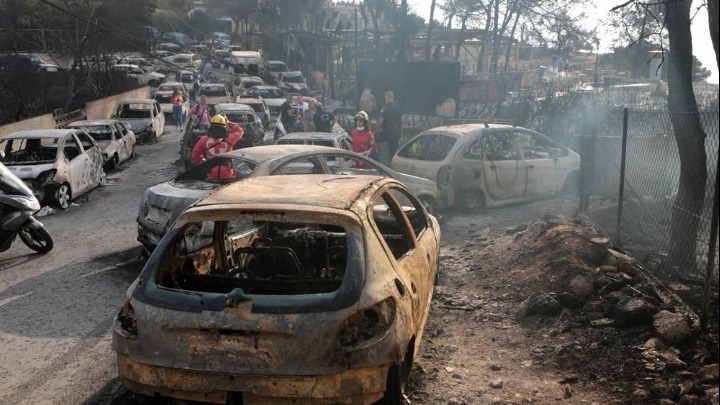 Greece’s Prime Minister Alexis Tsipras called for a three-day mourning period following the deadly blaze in east Attica that claimed the life of more than 60 people.
The official death toll stands at 50, but reports suggest that the number of casualties is higher as bodies are discovered in the worst affected areas. Dozens of people have also been reported missing.
In a televised address on Tuesday, Tsipras vowed that the government will assist everyone that has been hit by the disaster.
“We will not leave anyone without the assistance of the state,” he said, adding: “With unity and faith in our forces we will recover.”
All the victims have so far been found in the area between Rafina and Nea Makri, especially in the resorts of Mati and Kokkino Limanaki, where they were trapped by the flames in homes and cars or drowned in their attempt to escape from the sea.
In the area of Mati, rescuers described a tragic scene as 26 people were found tightly huddled in a field about 30 metres (100ft) from the beach.
Nikos Economopoulos, head of Greece’s Red Cross, told Skai TV: “I was briefed by a rescuer that he saw the shocking picture of 26 people tightly huddled in a field some 30 metres from the beach.”
According to information, the injured have risen to 156, 11 of which are in critical condition.
Preliminary reports suggest that more than 1,000 homes have been destroyed by the blaze.