In the new generation of Greek filmmakers and behind the scenes talent, there are definitely a few standouts. 25-year old Petros Antoniadis, an up-and-coming director and cinematographer racking up awards and impressive distinctions in film festivals around the world, may be one of the youngest and most talented in this innovative, creative group.

Born in Chania, Crete, on August 12, 1992, Antoniadis always had an inclination towards drawing and painting in his chilhood, perhaps inherited from his grandfather Petros Vlahakis, a painter and one of the first photographers of the island.

Eventually, Antoniadis turned his attention towards photography, and shortly after became fascinated by the moving image. His love for his work was such that he shot his first medium length movie, “The Poor Man Who Became Rich” at the tender age of 12 with the help of his friends. 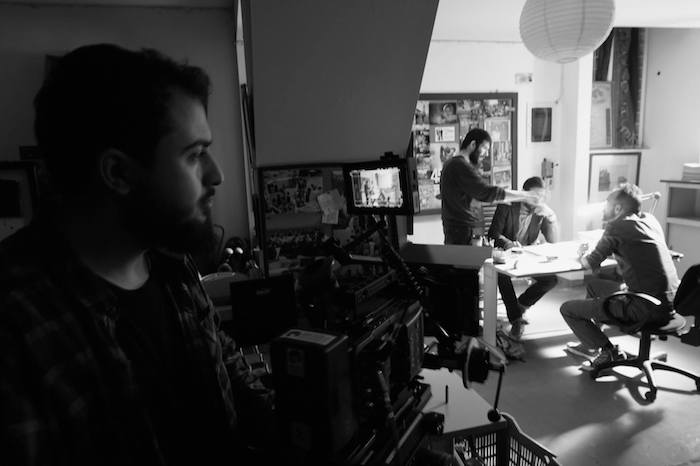 The next year, Antoniadis decided to pursue his professional aspirations more seriously. He started taking filmmaking lessons at the Film Workshop of Chania and soon completed his first two short films, “It Happened” (Sinevi) and “The Ideal” (Idaniko). The second film, which was screen at the Camera Zizanio Festival for filmmaking youth, led to his meeting with famed cinematographer Walter Lassally, the man who worked on the legendary “Zorbas”, who became Antoniadis’ mentor and teacher up until his death in 2017. Lassally had an illustrious career in moviemaking, during which he also won an Oscar for black and white cinematography.

The young filmmaker started studying at Maine Media Workshops & College, and while still a teenager, won his first award in 2008 at the Larissa International Film Festival – Artfools, for his movie “The Justification” (I Dikaiosi). Just one year later, he completed the film “A True War Story” in the US, where it won Best Cinematography at the Harvard Westlake Film Festival.

This caused Antoniadis to expand his horizons to the international stage. While still working on high-profile Greek films and TV series like “The Island” (Nisi), the fledgling filmmaker started entering prestigious film festivals around the world, and made his premiere at the Los Angeles Greek Film Festival in 2009 with the film “Alter”.

In the past few years, Antoniadis has continued to move up at a rapid pace in the filmmaking work, making several projects a year, and racking up awards at festivals including the Canada International Film Festival (Best Experimental Film for “Alter”), London Greek Film Festival (Best Short Film for “The Spectator” – Theatis), Alaska International Film Awards (Kodiak Award), for both his films and his cinematography. He has also worked on projects for charity, including a video he directed for Santa Run Chania, founded to help the young children of Chania. You can see the video in Antoniadis’ film reel below.

The young up-and-comer has worked on shorts and features, commercials and music videos, and is constantly fine-tuning his skills behind the camera. He continues to be prominent in Greece, winning Best Cinematography at the Athens International Digital Film Festival for two years in a row, while pursuing projects all over the world. Last year, he shot the music video “Lightsaber” for famous Greek musician Panos Mouzourakis, widely recognized as one of the best music videos to ever be shot in Greece.

Antoniadis has brought both his films and talent to Canadian and US projects recently, and given his passion and experience for his young age, will likely continue his career and eventually find his way to high-profile projects in the entertainment capitals of Los Angeles and London.

Keep an eye out for Petros Antoniadis soon in the most prestigious film competitions in the world, as well as on your screen; whether he is capturing beauty in motion as a cinematographer or creating groundbreaking, innovative films, his talent and vision cannot be overlooked.