By guest
May 29, 2018
Facebook
Twitter
WhatsApp
Linkedin
Email
By Heini-Sofia Alavuo
Greece is known for its beauty and nature, but this doesn’t always shine through in the bigger cities. People living in urban areas often don’t have easy access to the country’s celebrated natural habitat, especially during the hot summers when shade from trees is much needed.
Parks and green areas offer the opportunity for many activities and provide a place for busy city people to relax and breathe. Green spaces can also improve the general and mental health of people by increasing an individual’s quality of life.
According to Eurostat – Statistics Explained, urban green areas play an important role in cities. By absorbing carbon from the atmosphere, they can improve the air quality and contribute to climate-change mitigation. Green areas also absorb rainwater, which is very important for dry and hot cities in Greece.
Athens is one of the least-green metropolitan areas in Europe, according to a capital ‘greenness’ evaluation study based on satellite images. Other metropolitan areas such as Kiev or Berlin ranked high on the list.
According to a survey, people in Heraklion, Crete as well as Athens are especially unhappy with the green area situation. There have been several protests and initiatives in the past to keep green spaces in the cities safe and open to everyone.
In Athens, people have been insisting the city’s municipality take action against the drug problem in public parks. People in cities want to have well-maintained, safe and clean green areas, where they can recharge and relax.
Heraklion in Crete, provides a small-scale case study. It is not a city known for its green areas, and the constant construction work and road blocks make the city’s view less admirable. Georgiadis Park is the only big green area in the city, and it’s under threat – again.
Although the park is located in the city center, it is relatively quiet and calm, despite the constant traffic close by. The park is an important place for locals – you can go for a coffee and enjoy the shade during a hot day, or have a look at the organic farmers’ market.
The park also works as a place for many cultural events, such as concerts and plays. It is an important meeting place for dog owners and offers peace for those who just want to get away from the haste of the city. 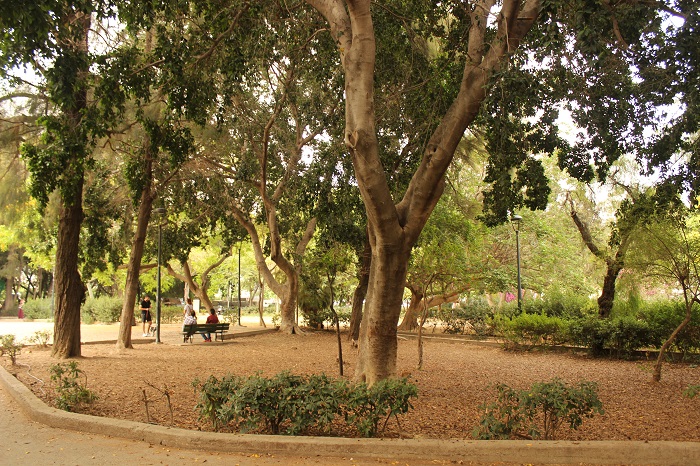 The municipality of Heraklion has targeted Georgiadis Park many times in the past, but campaign groups have managed to postpone its plans for now.
The Tribes of the Park is a civilian initiative that wants to stop the municipality’s new plans to “upgrade” the park.
Jelena (last name withheld) is a biologist and a member of the group. She says that they gathered for the first time last November, and have been trying to fight the development plans ever since.
The municipality of Heraklion says it wants to renovate the park – to make it more suitable for tourists. The Tribes of the Park are worried the municipality will trim and cut down trees and their roots. The municipality has a lot of money involved in the project, but activists say it refuses to listen to locals who are concerned about their plans.
Jelena says that there is a reason why they don’t trust the municipality with the park – in the past they have had similar plans to change the area and kept cutting already-rare trees all around the city.
“The municipality doesn’t like the free spirit in the park – they want to be in control of what happens here. We believe that the park is a place for everyone and we appreciate diversity – in humans as in nature,” Jelena says.
The Tribes of the Park admit some parts of the park need improvement, but say they don’t trust this job to the municipality. It would be better to let the people who actually use the park to take care of it, the group says.
Despite repeated attempts by Greek Reporter to speak to the Heraklion municipality, no one was willing to comment.
The people fighting for the park want to keep it as it is – a vital place in the city, where people can go and meet with one another.