Police Officer Among Suspects of Mob Attack Against Greek Mayor 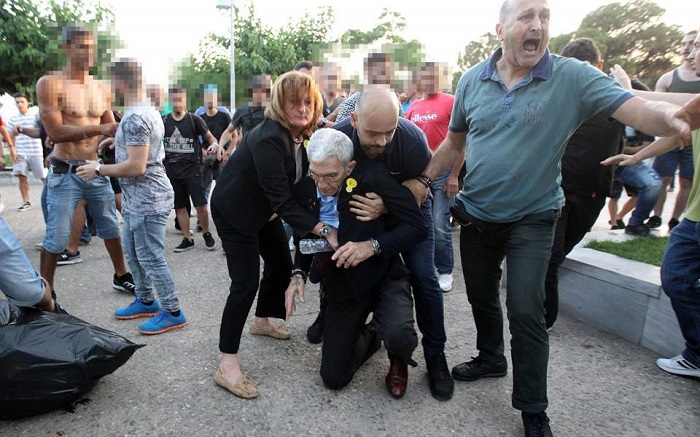 An off-duty police officer was identified and charged for the attack by a group of extreme nationalists against mayor of Thessaloniki, Yiannis Boutaris last Saturday.
The 44-year-old officer was identified by video footage of the assault that took place in front of the northern port’s emblematic White Tower during a commemoration of the World War I genocide of the Pontic Greeks.
Reports say that the officer had failed psychological tests in 2015 and since then he was moved to an office post.
Video footage has helped to also identify two more suspects, a 43-year-old shop owner and a 57-year-old pensioner.
Three people have already been found guilty by a misdemeanors court in Thessaloniki on Wednesday.
Two of the accused, aged 20, were handed a 14-month and 21-month suspended prison sentence respectively, while the 36-year-old ethnic Greek from Georgia received a 14-month jail sentence, which he was allowed to buy out for five euros per day, as he did not meet the conditions for a suspended sentence.
The 75-year-old mayor was set upon by about a dozen people demanding that he leave the event. He was then pushed to the ground and kicked several times in the head, back and legs.