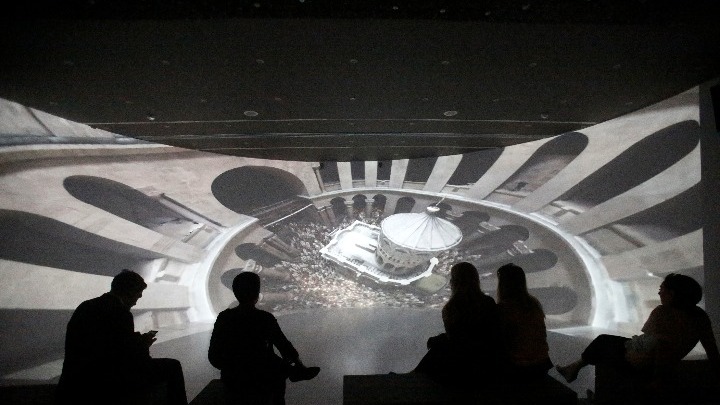 A digital exhibit on the Greek-led preservation and restoration of Jesus’ tomb has been inaugurated by the country’s president at Athens’ Byzantine and Christian Museum.
‘The Holy Sepulchre: The monument and the project’ was inaugurated by President Prokopios Pavlopoulos in the presence of Culture Minister Lydia Koniordou and other officials, and will run to Jan. 31, 2019.
The Church of the Holy Sepulchre in Jerusalem is built over the traditional site of Jesus’ crucifixion and burial.
The project dealt with the restoration of the Edicule, the small building within the church that covers Jesus’s burial place, undertaken by a team of experts from the National Technical University of Athens (NTUA), and the exhibition uses 3D models and new technology.
It was completed in nine months and presented to representatives of the three denominations managing the site: the Greek Orthodox; Catholic (Franciscan Order); and Armenian Orthodox.
NTUA Professor Antonia Moropoulou told the Athens-Macedonian News Agency (ΑΜΝΑ) that the details of the project, which were turned over to the three communities, was being exhibited so the public could share in the process.
Moropoulou expressed the hope that further work would be carried out on the rest of the Holy Sepulchre building, as it is in need of preservation.
“The project must be extended into the Church of the Holy Sepulchre, to allow it to survive through the ages,” she noted.
The exhibit is also being shown at the National Geographic Museum in November 2017, and will remain there until August this year.
The exhibit at the Byzantine and Christian Museum is open Tuesday-Sunday 8 a.m. to 8 p.m. and Mondays noon to 8 p.m.
(Source: AMNA)