By Philip Chrysopoulos
May 1, 2018
Facebook
Twitter
WhatsApp
Linkedin
Email
Greece ranks last in business environment and low in talent capitalization among OECD member states, according to a report by the Organization for Economic Co-operation and Development released on Monday.
The OECD report says that even though recent reforms have improved the business environment in Greece, the country still fares very poorly in this aspect. 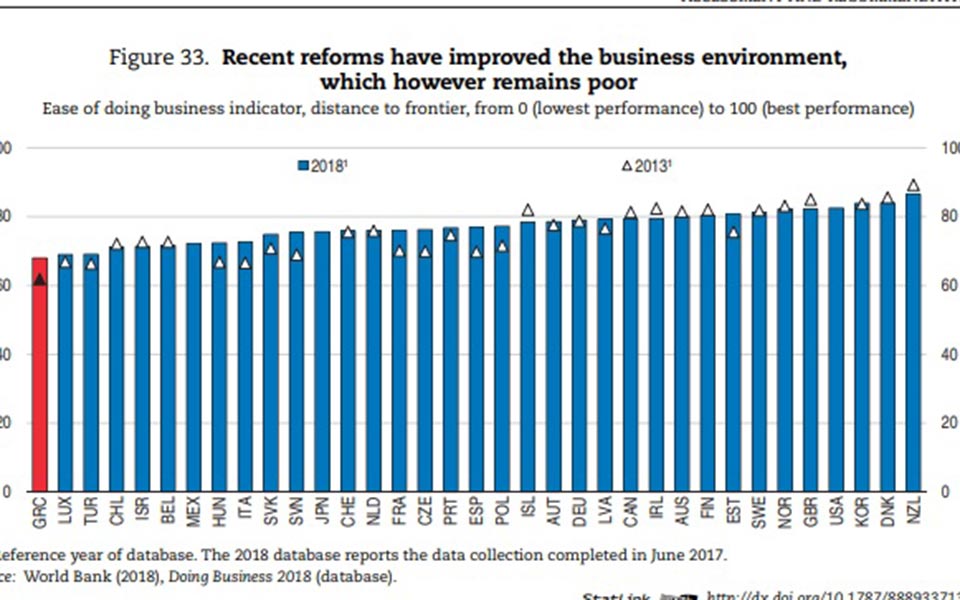 The Agency notes that the recent reforms have improved the business environment in Greece, but it remains poor.
Specifically, the report notes, even though there is great progress in the products market, public administration and excessive bureaucracy continue to mar the business environment.
The report further says that there are continuous bureaucratic and political obstacles in private investment, while at the same time Greek banks are very frugal in providing adequate loans to businesses.
Furthermore, heavy taxation and a narrow tax base – mainly due to tax evasion – deter growth and create inequalities. OECD suggests that measures should be taken to battle tax evasion, noting that 40 percent of the income of professionals and freelancers is not declared to the tax authorities.
In regards to the judicial system and decisions in financial matters, OECD notes that it is very slow, and as a result businesses face obstacles that are counterproductive.
The OECD also notes that the fight against corruption and bribery of state officials is a key element in the reform of public administration and remains of the utmost importance for improving the business environment.
It also notes that in many countries critical to the fight against corruption is the capitalization of talented people. Greece is very low in taking advantage of talented people who most often choose to move abroad where they find meritocracy, a better work environment and higher salaries.