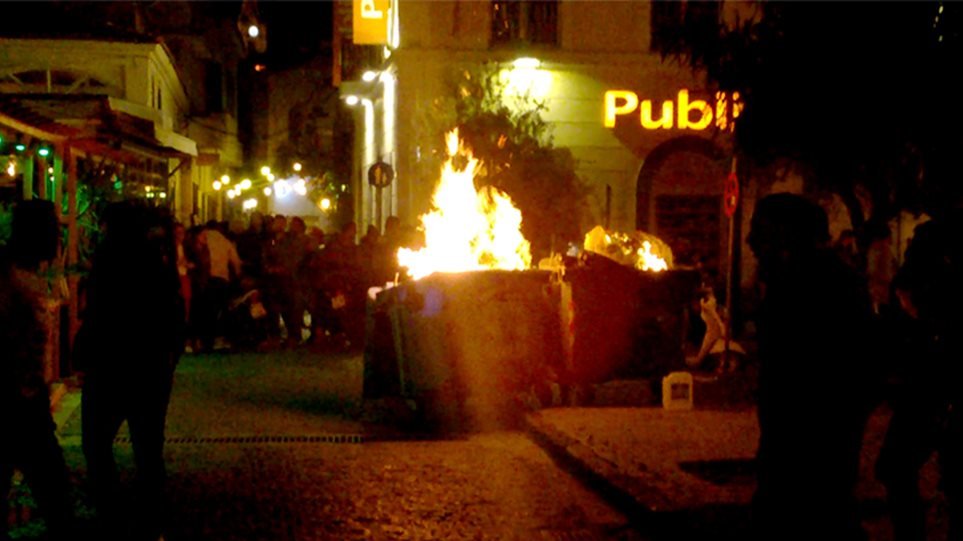 Violent clashes between a Greek far-right group, riot police and migrants raged almost all night in the town of Mytilene on Lesvos on Sunday night, leaving several injured, according to the Athens-Macedonian News Agency (AMNA).
A Facebook group called “Mytilene Patriotic Movement II” invited people to Sappho Square in Mytilene on Sunday at 7:30pm, for the daily flag down-haul ceremony. The gathering was to protest against the prolonged imprisonment of the two Greek soldiers in Turkey.
At the end of the flag down-haul, around 8pm, about 200 people – mostly young men of far-right political affiliations – moved towards the squatting refugees and migrants.
Asylum seekers had been squatting at the square since Wednesday, in protest against their prolonged stay in the overcrowded Moria registration camp. Upon the arrival of the Greek group, the migrants and refugees formed human chains around the women and children.
The Greek group tried to break through a police line guarding the protesting migrants. With shouts “burn them alive” and curse words, the Greek far right group started throwing flares, bottles and stones at the asylum seekers.
The police line was soon strengthened by Greek left wing activists who came to the defense of the asylum-seekers and proceeded to chase off the attackers.
By around 1am, the skirmishes had spread to the waterfront and the Town Hall, as the attackers set fire to trash containers and attacked police with makeshift projectiles.
Things quietened down in the early morning hours when police moved the asylum seekers back to the Moria camp, and put a heavy guard around the facility to prevent further attacks.
According to AMNA, several migrants were injured in the attack and are being treated at the local hospital.