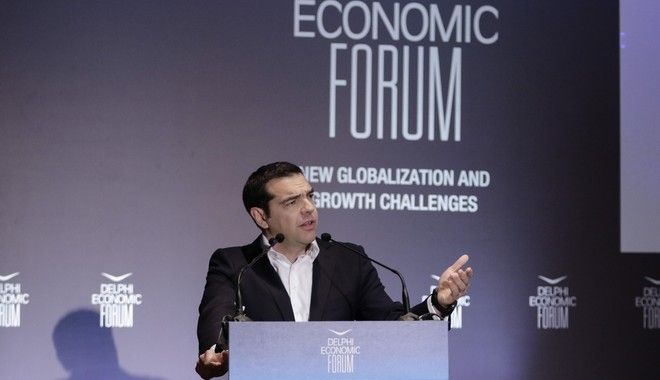 Greece has become a friendlier and more credible country in terms of business and investments, Prime Minister Alexis Tsipras said addressing the Delphi Economic Forum on Friday.
The country has become “less bureaucratic, with a modern tax system, uniform and fair competition rules, and with a far stronger social structure for all Greek citizens,” the Tsipras said, providing a review of his government’s achievement and looking forward to the end of the bailout program in August.
The Greek prime minister said that “recession-mired Greece returned to growth dynamically in 2017, and this trend is expected to lead to over 2 percent growth this year and the following years.”
He also said that his government is working on “a comprehensive growth plan for the day after” when Greece completes its bailout programs and returns to the international stage as an investment-friendly country. “We are, as they say in the market and investor jargon, ‘the next best thing’,” he said, and called the country’s post-bailout future “an open and dynamic field being formed (where) critical decisions will have to be made.”
Among other things, the premier referred to the opportunities explored in ten regional development conferences, to the efforts to reintegrate young people into the labor market through training programs and stem the brain drain through tax incentives and increased research and technology funding, and Greece’s role as an equal member of the EU.
Now that Greece has “proven its credibility, it’s time to assume the self-cleansing of its economic strategy and the sense of responsibility this calls for,” the premier said, noting that “debt relief would be the crowning glory of a tough but well-planned and successful effort we are completing, thanks to the sacrifices and toil of the Greek people.”