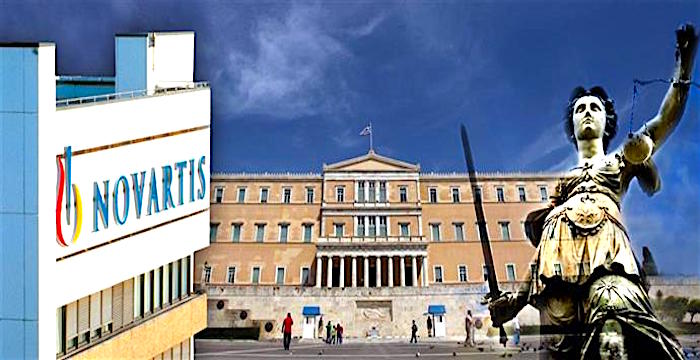 The Greek government managed to get the votes needed to form a parliamentary committee to investigate witness testimonies that two former prime ministers and eight ministers were bribed by Novartis.
The nine politicians who were present in the House stated their arguments, all of them saying that the Novartis case is a machination orchestrated by the government to defame them. They denied the charges and challenged the protection status of the witnesses.
Former health minister Dimitris Avramopoulos, who is currently European Commissioner for Migration and Home Affairs, had previously sent a note saying that he will be absent due to obligations with the EU.
Prime Minister Alexis Tsipras promised that justice would be done.
“We will not cover up (the scandal),” he said during the debate. “The Greek people must learn who turned pain and illness into a means of enrichment.”
Deputy Justice Minister Dimitris Papaggelopoulos accused the opposition parties of trying to intimidate prosecutors and judges by accusing them of participating in the government’s machinations and procedural wrongdoings.
On their part, the politicians accused asked that the telephone conversations between Papaggelopoulos and Supreme Court Prosecutor Eleni Touloupaki be made public, insisting that the investigation is orchestrated by the government and carried out by the prosecutors.
Former vice-president Evangelos Venizelos, former health ministers Adonis Georgiadis, Giorgos Koutroumanis, Andreas Loverdos, Andreas Lykourentzos and Marios Salmas, former prime ministers Panagiotis Pikrammenos and Antonis Samaras, and former finance minister Yiannis Stournaras, all took the podium and denied the accusations. At the same time they accused the administration of an unscrupulous smear campaign.


Pikrammenos, who served as interim prime minister for 35 days in the 2012 elections, cried during his speech, saying that he defended his country at a very difficult period and six years later he is brought to the defendant’s bench facing unsubstantiated accusations. “I expected to be treated with more respect”, he said characteristically.
Georgiadis said that he has all the figures of medicine expenditures during his term as health minister and they are a far cry from the €65 million euros that his ministry supposedly paid to the Swiss drug giant according to the witnesses. He also said that during his term, medicine expenditures dropped.
Venizelos said that the government is playing the Novartis card because its narrative that Greece will have a clean exit from the bailout program in August failed to convince, and the Imia situation is worse than ever before. He also said that the majority of Greeks feel that the administration has failed in the FYROM name negotiations.
“I came here to condemn the ridiculous accusations, not to apologize,” said former prime minister Samaras. “Any future government will be able to invoke anonymous witnesses to smear its opponents. This will be the end of democracy,” he further said.