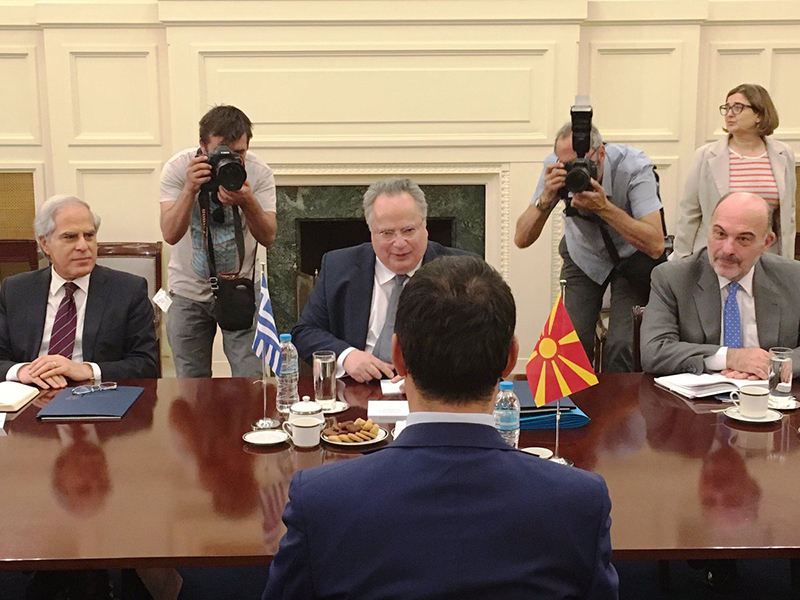 The Greek government is against the idea of a referendum on the name of Former Yugoslav Republic of Macedonia (FYROM), foreign Minister Nikos Kotzias said on Monday evening.
Speaking on ANT1 television, Kotzias said that Athens will propose a composite name for all uses in its negotiations with FYROM on the naming issue, specifying that the name will differentiate the neighboring country from Greek Macedonia with geographic qualifiers.
The Greek foreign minister reiterated that FYROM will not be able to join NATO and the EU unless it comes to an agreement on the name with Greece first.
On the question whether Greek people can express their opinion on the name issue in a referendum, Kotzias said that the government has rejected the idea. Asked about a referendum in FYROM, he said that this is a domestic issue for the neighboring country.
FYROM Vice-President: Refererendum on name might be detrimental to talks
A possible referendum in FYROM on the name issue might be detrimental to the upcoming negotiations, said the country’s Vice President Bujar Osmani.
A referendum on the issue of naming should not be imposed on the country’s internal political scene, nor should it be the subject of party controversy, the FYROM vice-president, responsible for European affairs said, according to an Athens Macedonia News Agency
According to Osmani, a referendum in FYROM could be counter-productive in the negotiating process to find a solution to the name issue.
Osmani is n Athens today (Tuesday) for meetings with the Greek Foreign Minister and Deputy Foreign Minister Giorgos Katrougalos.