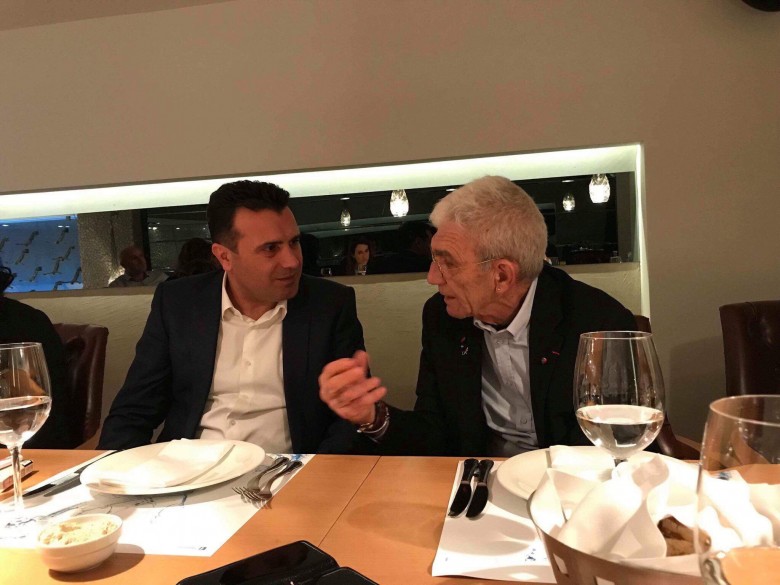 (Zoran Zaef, left, with Thessaloniki Mayor Yiannis Boutaris)
Former Yugoslav Republic of Macedonia (FYROM) Prime Minister Zoran Zaev on Tuesday expressed optimism that the name issue will be resolved in the first six months of the year.
Upon his return to Skopje after an unofficial visit to Greece, the FYROM premier said that the two neighboring countries will finally come to a conclusion over a dispute that has divided them for over 25 years within the next six months, according to the Athens Macedonia News Agency (AMNA).
“For our part, we are ready for a substantial and true engagement into resolving the name issue in the first six months of this year. I am convinced that it is possible to find a solution, but of course it is also necessary to encounter readiness from the other side,” Zaev said.
The FYROM prime minister spent the New Year holidays in Thessaloniki, as a guest of Mayor Yiannis Boutaris. After his visit, which he stressed that it was private, he said that politicians should open closed doors in order for citizens to communicate and cooperate better between them and abandon prejudices, according to AMNA.
Following a government change at Skopje in 2017, the new administration has shown that it is more cooperative regarding the name issue. Zaev and Greek Prime Minister Alexis Tsipras spoke on the telephone on Tuesday and expressed the will to resolve the issue and put an end to the dispute within the next six months.
Negotiations between the two sides will take place with the mediation of United Nations representative Matthew Nimetz.