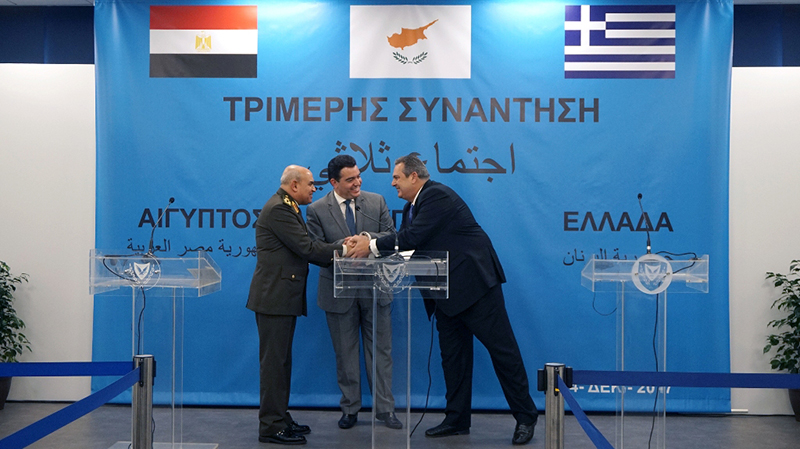 Greece, Cyprus and Egypt have agreed to cooperate in the surveillance of the volatile eastern Mediterranean region to prevent arms and people trafficking, and to fight terrorism and asymmetric threats, the Defence Ministers of the three countries said in a joint statement on Thursday.
The statement released after their meeting in Nicosia, said that the ministers also agreed on joint ground, air and naval exercises, exchanging information and cooperating in the exploitation of energy sources in the Levantine region.
The statement, said Christoforos Fokaides of Cyprus, Panos Kamenos of Greece, and Sedki Sobhi of Egypt, held the first tripartite defense meeting of their countries at the air and maritime coordinating centre in the southern city of Larnaca.
“We are investing the best possible cooperation to tackle in the best possible way new threats, such as terrorist violence and the illicit trafficking of migrants and weapons, and to create security conditions for maritime and energy,” Fokaides said after the meeting.
Greek Defence Minister Panos Kamenos said, Cyprus will be a hub for the program as it is a node joining Africa and the Middle East with Europe.
“The defense cooperation between our countries will secure a zone within this very sensitive sea region between Suez, Cyprus, Crete and Malta, where there will be no trafficking of drugs and weapons that fund terrorism,” Kammenos said.
The ministers said that they agreed to meet at least once a year, and to set up a coordination committee to oversee the application of the accord.
Source: Xinhua