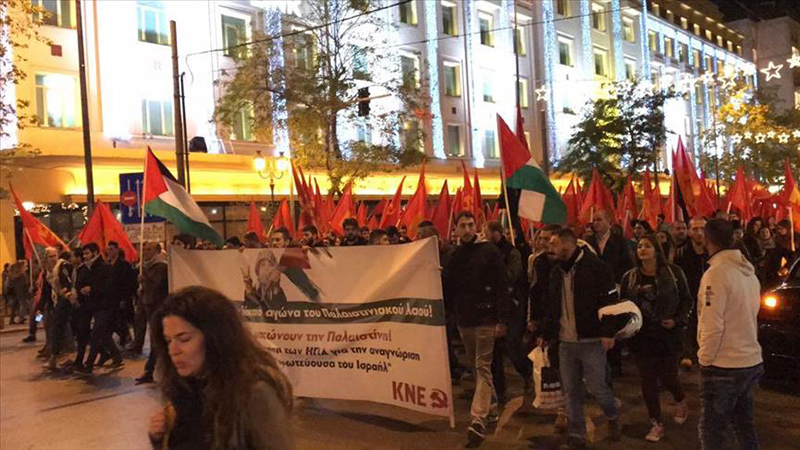 About 4,000 Greeks and Palestinians gathered in Athens and marched towards the U.S. embassy to protest U.S. President Donald Trump’s decision to recognise Jerusalem as Israel’s capital.
The protest was called by Palestinian organizations, the Youth section of the Greek Communist party and several other local and international leftist groups.
The protest was addressed by Palestinian Ambassador Marwan Toubassi, who said the “demonstration expresses the conscience of the free people”.
Toubassi said the Palestinians will continue their struggle until the creation of an independent Palestinian state and called on the Greek government to say whether it is willing to recognize such a state.
Demonstrators chanted slogans demanding a “Free Palestine” and called Americans “killers of the peoples”.
The protest was part of international reactions against president Trump’s to recognize Jerusalem as the capital of Israel and his announcement of plans to relocate the U.S. embassy from Tel Aviv to the contested city.
Demonstrators waved Palestinian flags, traditional keffiyeh scarfs and burned several Israeli and American flags. Sketches depicting the American president were also set alight while gathered Palestinians and Greeks cheered.
The demonstration ended peacefully, without any action from riot police assembled in front of the US embassy.