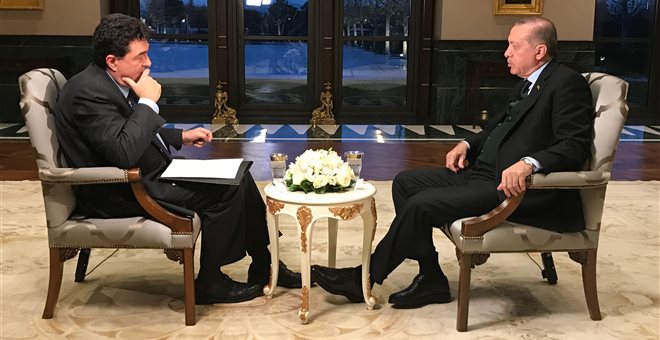 Turkish President Recep Tayyip Erdogan arrives to Greece today (Thursday) likely to challenge the Treaty of Lausanne and have some other unreasonable demands, according to a recent interview to a Greek journalist.
In an interview to Alexis Papahelas aired on Wednesday night on Skai television, Erdogan spoke openly about controversial issues, challenging, among other things, Greece’s territorial sovereignty.
“Airspace and territorial waters and the different measurements can be improved,” the Turkish president said, disputing the Treaty of Lausanne that delineates the borders of the neighboring countries.
“I think during the course of time, all of the treaties need a revision, and Lausanne, in the face of the recent developments needs to be spruced up, a revision if you will,” Erdogan said.
The statement came after the journalist spoke of the continuous Greek airspace violations by Turkish warplanes.
The Turkish president also expressed his displeasure over the Greek court decision to not extradite eight Turkish military men who sought political asylum after the failed coup in the neighboring country in July 2016.
He said that Greek Prime Minister Alexis Trsipras had promised him right after the coup that he will extradite the plot suspects immediately.
“When the Turkish coup men came to Greece and sought shelter, I immediately called on Prime Minister Mr. Tsipras. I told him, “Dear friend, this is the situation. They fled from Turkey and landed in Greece. These people organized a coup, or attempted to organize a coup and I want them to be extradited to Turkey.” This was the first night of the failed coup. And he told me he would take care of it, and that in 15 to 20 days would be sent to Turkey. That’s what he said. But unfortunately, they are still in Greece right now.”
Turkey has branded the eight soldiers as terrorists and traitors. “Terrorists, when they are detained in Greece, they should be extradited to Turkey. If you leave it in the hands of the judiciary no outcome can ever be cultivated and you won’t be able to cultivate any results,” he said, adding that, “Delayed justice is no justice.”
Also, when Erdogan referred to the Muslim Minority of Western Thrace, he spoke about them as “compatriots”. Turkey has often claimed that the Thrace Muslims are displaced Turks, when in fact they are Greek citizens who have four representatives in the Greek Parliament.
Athens reacted to the Turkish president interview content. Government spokesperson Dimitris Tzanakopoulos said: “Respect for the Treaty of Lausanne is the exclusive and non-negotiable foundation on which the sincere cooperation of the two countries can be built,” stressing that “reports of its revision do not contribute to the climate of cooperation we are trying to build in bilateral relations and in the region.”