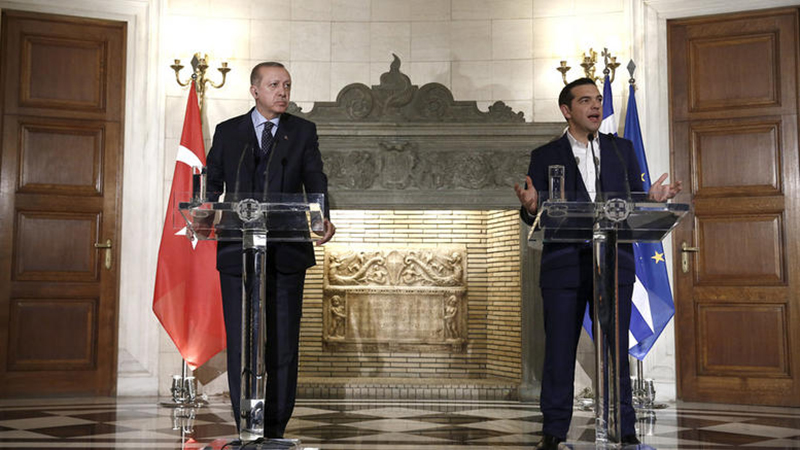 In an often awkward joint press conference following their meeting, the two leaders focused on the two countries cooperation, but mildly attacked each other’s positions on bilateral issues, with some of the respective comments becoming dangerously personal.
“We are aware of the issues impeding our relations, but at this time, when there are many regional issues, communication is important,” Tsipras said. “Mutual respect is crucial. Peace and stability are the imperatives, but we should both respect international treaties, like the Lausanne treaty.”
Attempting to put an end to all talk about renegotiating the 1924 Lausanne treaty which rules the treatment of minorities on both countries, Tsipras added that treaties are non-negotiable, but bilateral relations should be a matter of ongoing discussions.
Erdogan first focused on the trade between the two countries, tourism exchange and the upcoming connection between Smyrna and Thessaloniki by sea. He added that Turkey has absolutely no border dispute with any neighboring country.
Then he accused the Greek state of not respecting its Muslim minority, insisting that there is a Turkish minority in Thrace, recognised by international courts, who’s rights are not respected.
He insisted that the mufti election issue is a thorn in bilateral relations and made a comparison of the Greek Muslim treatment with that of the Greek minority in Istanbul.
He said that although the Turkish state has waived its international right to have a say in the Orthodox patriarch’s election in Istanbul, offering the process full aytonomy, the Greek state insists on appointing the mufti in Thrace, not allowing the local minority to elect its religious leader.
Erdogan added that Greece is the only European country with no Muslim temple. He then blamed the Greek-Cypriot side for the Cyprus reunification issue, for not agreeing in talks preceding the referendum of 2003.
Concerning the migrants issue, he accused the EU of not keeping its side of the commitments in the EU-Turkey deal.
During the short question time that followed, Tsipras said he had just realised that Erdogan was not actually talking about a renegotiation of the Lausanne treaty – rather the correct implementation of said treaty, an issue on which Greece agrees.
Concerning the issue of Muslim and Greek minorities in the two countries, Tsipras said it should be bringing the countries together, rather than dividing them.
“The government is very sensitive to all minorities, including the Muslim one, but minorities are not a subject of negotiation with other countries,” Tsipras said.
On the Cyprus issue, Tsipras reminded the Turkish president that the issue was created by the “illegal invasion and occupation of the island,” referring to the 1974 Turkish invasion of Cyprus.
On the issue of religious freedom, Tsipras said that there are Muslim churches being built all over the country as we speak. On the other hand, Greece have never considered performing any Orthodox Christian religious services to a mosque, unlike Muslim ones, which Turkey was recently considering performing in Aghia Sofia church in Istanbul.
On the migrant issue, Tsipras mentioned that both Greece and Turkey are victims of the migrant flow and that talks between him and the Turkish president were fruitful on the issue.
On yesterday’s US declaration of Jerusalem as the capital of the Israeli state, Tsipras said that Greece fully supports the two-state solution in the area and the Greek government will promote the issue through the EU. “The US Jerusalem recognition by the US is a decision which does not help in Israeli – Palestinian negotiations,” he added.
When his turn to answer came, Erdogan stood his ground. He reiterated the minority issues, claiming that the local mufti in Thrace should be popularly elected by the minority and that Greece should see to it. Naturally this is an internal issue of Greece, he added, but Turkey’s view is that is should be resolved soon.
On the Cyprus issue, Erdogan said that it is on Turkey’s Foreign ministry domain and that his country is doing its best to resolve it. Then, he made a patronizing comment, rather unexpected during public statements in a diplomatic mission.
“Mr. Tsipras is too young and has little experience,” he said. “I am more experienced on the history of the Cyprus issue and can provide him with all necessary documents. If the 2003 ‘Annan plan’ was implemented by both sides, the issue of Turkish troops on the island would have been resolved, but the Greek-Cypriots rejected the plan.”
Asked about the issue of the Turkish soldiers in Greece wanted in Turkey for the July 2016 coup attempt, Tsipras reiterated that it’s up to the Greek judiciary to decide whether the soldiers seeking asylum will be granted one, but that his political position is that Greece is against all dictatorships. He added that the Turkish soldiers should have a fair trial.