The European Parliament honoured the late Greek politician and former prime minister Constantine Mitsotakis, by naming a room after him in Brussels on Thursday, in the presence of Eurodeputies and Greek officials. 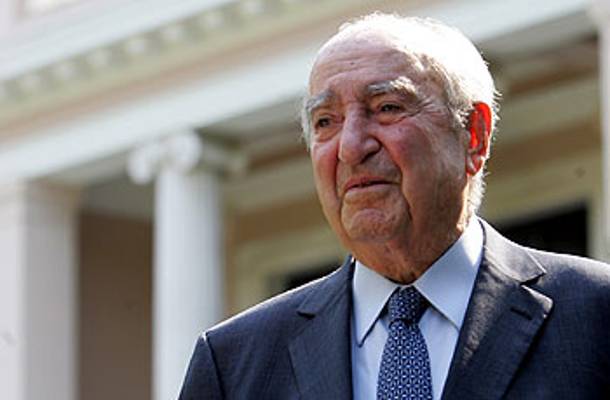 The event to name the “Room” was attended by Europarliament President Antonio Tajani, European People’s Party President Manfred Weber, and family members, including leader of the main opposition New Democracy (ND) party Kyriakos Mitsotakis and ND deputy and former minister Dora Bakoyannis.
Also attending were Eurodeputies from several political groups, deputies and officers of ND, and European Commissioners Dimitris Avramopoulos (Migration, Home Affairs and Citizenship) and Christos Stylianidis (Humanitarian Aid and Crisis Management).
During the dedication ceremony, Tajani said that a Europe without Greek ideals is not possible, while Weber said that the Europarliament was honoring Mitsotakis, who died in May aged 98, for his commitment to the European dream and his courage to deal with terrorism.
He also said that Mitsotakis belonged to the same line of outstanding statesmen as “fathers of Europe” Conrad Adenauer and Robert Schuman.
Speaking on behalf of the family, Kyriakos Mitsotakis said that his father served the public interest; was twice condemned to death for his beliefs, and realized that the unification of Europe could bring peace and prosperity.
He believed in the European dream, he fought populism, and his contributions were recognized by both friends and enemies, leaving a great statesman’s unchanged heritage behind him, his son said.
Constantine Mitsotakis was first elected to Greek Parliament in 1946, and held several ministry portfolios in his political career. He was prime minister of Greece from April 1990 to October 1993.
(Source: AMNA)