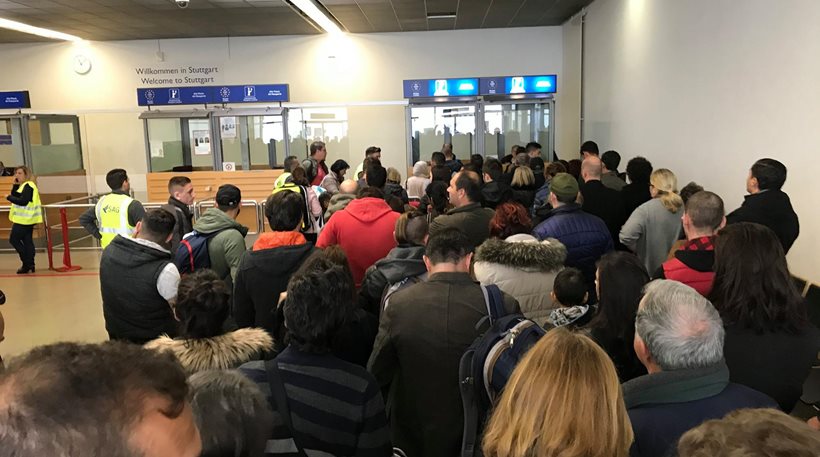 German authorities explained that the reason for imposing stricter airport controls on flights from Greece is because 1,000 people flying from Greek airports arrived in Germany illegally.
Greek authorities have complained to Berlin for the different treatment of travellers from Greece, who now go through separate controls upon arrival in German airports.
“After sample checks on flights from Greece in the January-October 2017 period, there were approximately 1,000 illegal arrivals; a number that is multiple of all other flights within Schengen,” was the explanation given by Germany’s Interior Ministry to Kathimerini newspaper.
German authorities worry that since Greek identification cards are easy to forge, there is a strong possibility that jihadist terrorists might use such ID cards to enter Germany and commit terrorist acts. The measure is taken at this time of year since Christmas season is a time when many people gather in several places, becoming easier targets for terrorist’s to hit.
Last December a Tunisian man; whose asylum claim was rejected, ran a truck into the crowd of the Christmas market in downtown Berlin, killing 12 people.
The measure went into effect on November 12, right before the holiday season, and will last for six months. It is limited to all German-Austrian land borders and arrivals from Greek airports, the Kathimerini report says.
“The decision was taken in cooperation with the interior ministries of Austria, Denmark, Sweden and Norway. The European Commission, the European Council, the President of the European Parliament and the Home Affairs Ministers of all Schengen member states have been briefed on the memorandum,” explains Berlin and insists that German authorities are in close and continuous contact with Greece.
Greek authorities report that since the extraordinary controls have been in place, a total of 33,000 passengers have been checked and 20 people were arrested.
On Monday, German authorities arrested six refugees from Syria; aged between 20-28, who were suspected of organizing terrorist attacks on behalf of the Islamic State, according to a statement from the federal prosecutor’s office, Kathimerini says.
“The people arrested are members of the Islamic State terrorist organization and are suspected of planning an offensive against a public target on German territory with weapons or explosives,” a spokesman for the Frankfurt Prosecution’s Office said on Monday.
Last month, German police arrested a 19-year-old Syrian man, who allegedly planned a terrorist attack using a powerful explosive. Germany’s state security service, BfV, estimates that at least 10,300 fanatical Islamists are staying in the country, with 700 of them considered to be dangerous and capable of committing a deadly terrorist act, the Kathimerini report concludes.