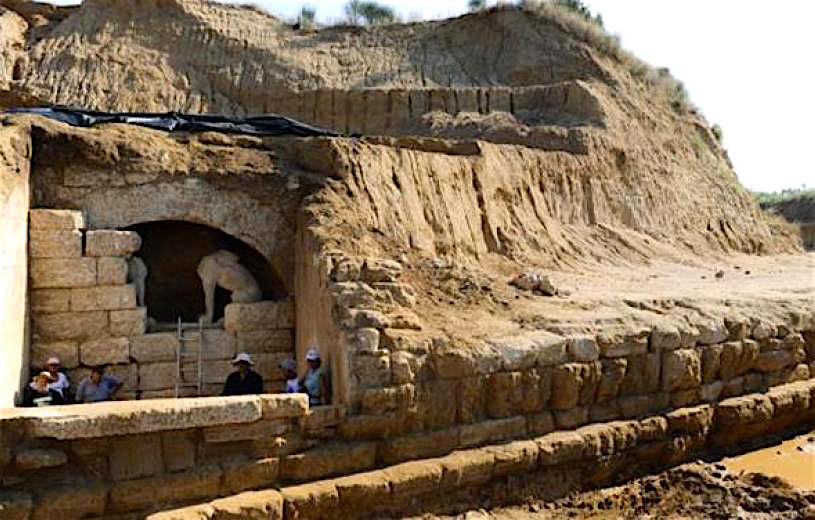 Archaeologists will now search for the ancient theatre of Amphipolis, after the Ministry of Culture, the Central Macedonia Region and the municipality of Amphipolis signed a joint effort contract.
The contract seals the start of research to locate the ancient theatre of Amphipolis in a specific amphitheatrical location overlooking the estuary of the Strymon River and the mountains surrounding it, the Athens Macedonia News Agency (AMNA) reports.
The contract says that a “geophysical survey” will be carried out by the Department of Geology of the Aristotle University of Thessaloniki, and then there will be exploratory test sections at the points indicated in order to locate the ancient theatre. If signs of a theatre are found, an excavation will be carried out.
The research is based on 1965 findings made by Dimitris Lazaridis; the archaeologist who discovered the location of the Amphipolis tomb, initially believed to be connected directly with Alexander the Great.
Lazaridis and his team had dug in the area and discovered two parallel walls, which had a clay pipeline between them. The openings brought to light a marble-decorated column base on a parcel near the ancient gymnasium. From there, a few pieces of vases belonging to the Hellenistic and Roman periods were collected, while a large drainage pipe was uncovered after the excavation of the gymnasium. The pipe starts from the area where the ancient theatre is presumably located and crosses the gymnasium.
Researchers estimate that the orchestra and some of the first rows of seats should be located deeper in the ground. If discovered, there may be an attempt to create the representation of the ancient theatre.