Sixteen Charged with Serious Offences Over Clashes in Exarchia 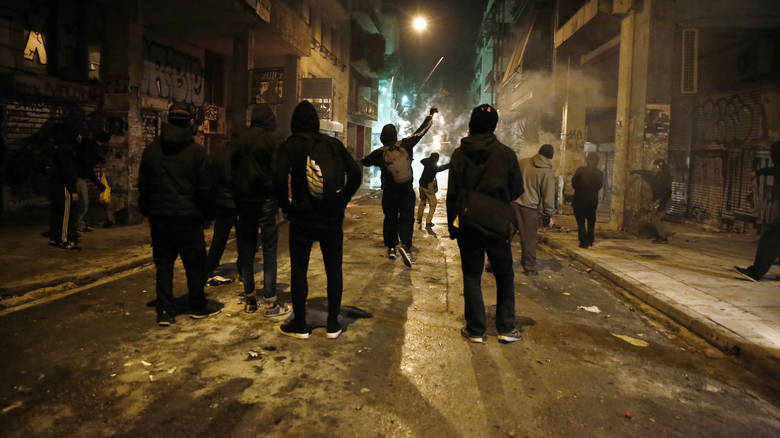 Sixteen people arrested during clashes with police in the Athens district of Exarchia were led before a public prosecutor on Saturday, to be charged with a number of serious offences. The incidents led to the injury of a woman lawyer, who was rushed to hospital and underwent surgery after a flare hit her in the knee, while police later announced that six police officers had also been injured in the violence.
The 16 were arrested during a coordinated police operation held just after midnight, following violent clashes between anarchists groups and police around the Athens Polytechnic on Friday night, after the end of the annual November 17 protest march.
A police announcement said the 16 arrested included nine Greeks, aged 18 to 32 years old, and seven foreign nationals (two French nationals aged 22 and 26, a 27-year-old Italian man, a 20-year-old Lithuanian man, two Germans aged 37 and 30 and a 19-year-old Iranian man).
The charges drawn up against them include: inflicting grievous bodily harm, attempt to inflict grievous bodily harm via arson, causing explosions, destruction of property and violating laws on arms and drugs.
Several of the roughly 100 individuals involved in the violence managed to get away by gaining entry into apartment buildings, where police did not follow. A total of 39 people were detained and brought in for questioning, of which 23 were later released for lack of evidence.
Elsewhere in Greece, there were two arrests and six people detained during clashes following Polytechnic Uprising events in Thessaloniki, where two police officers were lightly injured, and five people were detained and then released in Patras.

Woman injured in Exarchia admitted to ICU in serious condition
The woman injured by a flare during clashes between rioters and police in Exarchia has been admitted to an Evangelismos hospital intensive-care unit and her condition is considered serious, hospital authorities announced on Saturday.
The woman was rushed to the hospital on Friday night, where she underwent surgery for an injury to her knee. The woman has been identified as a lawyer who was talking to photojournalists at the corner of Notara and Kountourioti streets. The flare is believed to have been fired with an improvised flare tube.
(Source: AMNA)

Nikos Tzellos, a young musician from Rhodes, has made it his mission to revive the folk music of his island for the modern era.
Ancient Greece

Games and workshops based on Ancient Greece and its political figures were recently created by group of academics from the University of Exeter in England.
Culture