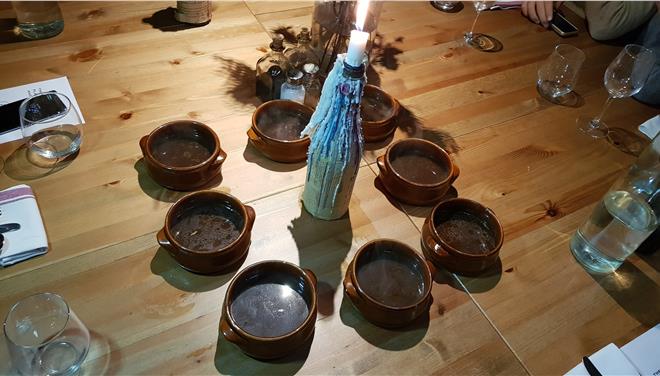 Enduring questions about the diet of ancient Greeks and the connection with contemporary Greek cuisine are issues that a Greek chef in London deals with.

“Our goal is to present to the British public the Greek cuisine in its entirety, starting from Ancient Greece and its nutritional secrets,” Chrysostomou said.

With the project “Secrets and Flavors from Ancient Greece”, the Greek chef hopes to introduce the unique tastes not only to the thousands of Greeks living in the British capital, but also to the British and other nationals.

“This is a vision that finally becomes reality. It is the product of an exhaustive study of prescriptions and sources of nutrition in ancient Greece, starting with the texts of Archestratos and Athineos,” Chrysostomou said.

Chrysostomou admits that there is no way of knowing how those foods tasted thousands of years ago, but the ingredients are known: “The truth is that we can not know how the food that ancient Greeks ate tasted. However, we use exactly the same ingredients that they chose to make up their meals,” he told Ta Nea.

Dishes like the famous “black broth”; that the ancient Spartans ate, “mypotos” (a kind of spinach pie) and “melicraton” (a sweet with nuts, honey and pollen) are some of the dishes that will be served during theme gastronomic nights that aspire to be a transformation of the ancient Greek symposiums.

After the “Ancient Greek dinners”, other themes will be presented, such as the Pythagorean diet (vegetarian oriented), the Hippocratic diet (prevention and treatment of diseases through food) and evenings dedicated to the local cuisines of Greece (Macedonia, Thrace, Peloponnese etc).

According to Ta Nea, Chrysostomou has been living in London since 2013. He has 17 years of experience as a chef in Greece and Britain. He is the head chef of the Greek Embassy in London, and owner of Lamda Delta Catering and Events.