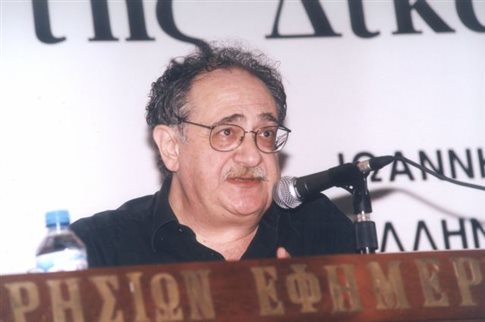 Renowned economist and writer Costas Vergopoulos passed away on Thursday in Paris after a short hospitalization for hematoma in the head. He was 75.
Born in Athens in 1942, Vergopoulos studied Law at the University of Athens and Economic Sciences at the University of Sorbonne, where he was awarded a Ph.D.
In 1974, he became Professor of economics at Sorbonne and later, in 1992, a professor of political economics at Panteion University in Athens. Since 2002, he has been a professor of economics at Paris 8, and has been a visiting professor at Northern and Southern American universities. At the same time, he worked as an expert at the United Nations and the European Commission.
Vergopoulos was the UNITAR Program Director and member of the Committee of Experts on Deregulation and Competitiveness in Europe. During 1997-1999 he was the head of ASEM’s Vision Group, which was aimed at fostering ties and co-operation between Europe and Asia. He was also a member of the Board of the Institute for International Relations.
Vergopoulos also wrote and participated in the writing of various scientific works, many of which have been translated from Greek to other languages.