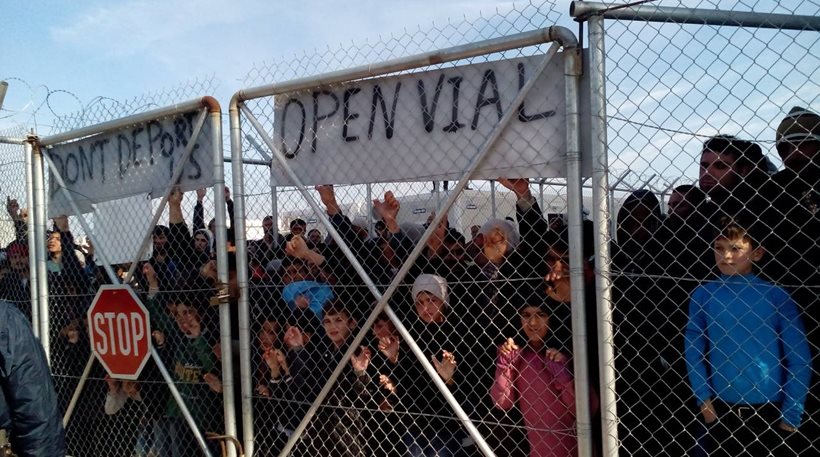 The Lesvos municipal council demands that Migration Policy Minister Yiannis Mouzalas fulfills his commitments; while the Chios municipality prepares to proceed with legal actions against him over the migrant issue.
More than 8,000 refugees and migrants are stranded in the town of Mytilene on Lesvos. The island, with a population of about 30,000 people, currently hosts 8,000 asylum seekers due to the rise of arrivals over the past three months. The migrants expect their applications for asylum to be processed.
The Lesvos municipal council decided to react “to the policies that tend to transform Lesvos; the island of humanity, peace and solidarity, into concentration camps” and called on Mouzalas to stay true to his commitment, while refusing the government’s plan to build a new registration and hospitality camp on the island.
As the Lesvos municipal council states: “It is evident from the outcome of the recent Parliamentary Committee meeting, where the management of refugee flows was discussed, that there is a lack of political will for the decongestion of the islands.”
The Lesvos authority asks from the Greek government and the European Union to decongest the hospitality structures, so that the asylum seekers can be accommodated in decent living conditions, and transfer the excess number of migrants to mainland Greece.
At the same time they ask for the investigation of allegations that NGOs or some of their members have links with traffickers and the policing of entry points to see if there are people on the islands who direct the traffickers.
Chios municipality to take legal action against the migration policy ministry
The municipality of Chios is considering to take legal measures against the Ministry of Migration Policy for the reception and registration center at VIAL, as living conditions in the camp remain squalid.
In today’s (Wednesday) municipal council meeting, Mayor Manolis Vournous will discuss the proposal of the legal department to take specific legal measures against the migration policy ministry.
The municipality’s legal department will look into the non-observance of certain terms of the VIAL site concession contract and the unacceptable living conditions of the hospitality structures.
The overflowing VIAL camp and the migrants who are camping in the surrounding area create serious problems to the residents and farmers of Halkious.
The municipal authority will seek the evacuation of the VIAL camp and the return of the property to the municipality by filing a lawsuit.